While most teenagers are sleeping in for the last two weeks of summer, Old Dominion Boat Club (ODBC) rowers are hitting the Dee Campbell Boathouse by 6:30 am every weekday morning to pick up their oars.  Beginning their pre-season training on August 24, ODBC Select Crew rowers held their first race on Friday, August 28 at the Dee Campbell Boathouse.  With 70 athletes from 5 schools competing, the rowers sprinted down a 5,000-meter course from Four Mile Run to the Wilson Bridge.  T.C. Williams High School junior Katie Murphy and Mclean High School senior Kaela Wilbur won top honors in the race.

Patrick Marquardt, Coach for the ODBC Girls, said, “Friday’s race was a great way to start the season.  Our rowers raced down the course in both double and quad sculling boats, as well sweep rowing 4s.  While these are not normally what they’ll row during the season, it is a lot of fun for our experienced rowers to get in shape on different types of boats.”

With over 120 athletes on the team, this year’s ODBC Select Crew is one of the largest in memory.  The athletes – who are drawn from such area high schools as T.C. Williams, West Potomac, J.E.B. Stuart, Washington-Lee, Wakefield, Yorktown, and McLean – are guided this fall by Head Girls Coach Patrick Marquardt and Assistant Girls Coaches Jaime Rubini, Cathy Hott, and Gracie Barbara.  The ODBC Boys are led by Head Coach Pete Stramese and Assistant Coaches Enoch Cleckley, and Tyler Buxton.

Marquardt stated, “Having outstanding rowers from across the region participate together in ODBC is a significant benefit for our rowers.  While many will compete against each other during the high school spring crew season, the fall ODBC program allows them to get to know one another and test their skills together.”

ODBC rowing has a long history in Alexandria.  In 1947, ODBC members Julian Whitestone and Jack Franklin began training young men from George Washington and Francis Hammond High Schools in rowing.  The fall ODBC Select Crew program, which brings together elite rowers from across the region, has its origins in this event.  For 2015, rowers will train at the Dee Campbell Rowing Center and compete in East Coast head races, including the Head of the Schuylkill in Philadelphia and the Head of the Charles in Boston.  A “head race” is a race against the clock, usually significantly longer than the 1,500 meter races done in the high school spring season.  Alexandria Crew Boosters, with support from ODBC, hosts the ODBC Select Crew Program.

The ODBC Select Crew’s first races are a scrimmage at the Dee Campbell Boathouse on September 19 and the Head of the Potomac in Georgetown on September 27. 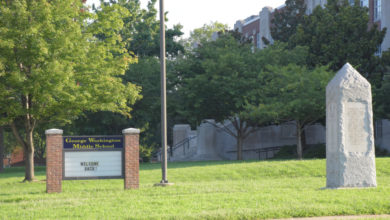