Old Town’s Resident Artist Creates in the Present, Plans for the Future

It was love at first sight—love of Old Town history and architecture—that inspired artist Todd Healy and his wife of two years, Laraine, to move from Virginia Beach in 1976. In following years, the Healys worked (Laraine for USAir for 26 years, Todd for National Airlines and later Colonial Parking), they had a daughter, and in his spare time, Todd painted Old Town.

Today, Todd Healy is known throughout our historic neighborhoods. Tall, with his startling shock of white hair, signature collection of 200 bowties, and sometimes gruff demeanor, Healy presides over Gallery Lafayette, 130 South Royal Street, and exhibits at the Saturday farmers market on Market Square.

He is known first for painstaking renderings of the historic residences and public buildings Alexandrians live with and in. Striving for more than accuracy, he captures their essence. “I don’t create a photograph,” he says, “rather the feeling of these buildings.” As much as 150 hours may go into each original, from which he makes prints.

Healy left Colonial Parking in 1984, after a gruesome murder was committed in a company lot and he was sent on site to represent the company. “News people were there, and police, and [the victim] was lying there,” Todd says. “I walked back into the office and said ‘guys, this is my last day, this is it.’” By next morning, he was a full-time artist.

Establishing a business based on meticulous artistic output can take a long time, but Healy had years of part-time effort to build on. And he had been noticed. That same year, Marriott Corporation commissioned 11 original black & white prints to enhance a hotel under construction in Richmond. (Ten years later, the hotel interior was redesigned. It is likely that now someone in Richmond has 11 original Todd Healy pen & inks on their wall.)

In 1989, the Commission on the Bicentennial of the U.S. Constitution chose Healy to create art for notecards sold in its catalog, which he recalls as “a nice coup. And they sold well.”

Healy also is widely known as a skilled and intuitive framer. “I have clients in New York, San Francisco, Philadelphia—and they don’t go anyplace else,” he says. “They always either bring it or send it.”

Mary Furlong, president and CEO of Mary Furlong and Associates, a San Francisco marketing and public relations firm, visited the studio recently with her son Michael and his girlfriend Jenna. “For 35 years,” Furlong says, “every corporate and personal milestone has been staged and framed by Todd.”

“Some clients come in two or three times a year,” Healy adds, “bring a stack of art work and say call me when it’s done. They don’t pick a frame, a mat, anything. I think what sets me apart, as far as my business, is I’m an artist who can frame—I’m not a framer.”

Todd gives thanks to Laraine for her emotional support, and her work at USAir, that enabled him to reach this success. “She’s very proud of what we’ve done.”

“We’ve been married for 41 years now, but for our 25th anniversary—my wife had jewelry, nice things, so I said ‘Sweetheart, what do you want for your anniversary’ and she said ‘I want you to paint me an Irish cottage.’ So I did. But it took some time. I had notecards made for her [of the Irish cottage].

“We always went to Williamsburg for our anniversary—it’s where we went on our honeymoon, when we were poor as church mice. We went to the Williamsburg Inn for dinner, I had a nice box wrapped with a big bow—and it’s the only time she cried when I gave her a gift. It’s true.”

Lauren Healy, 36, is a freelance photographic stylist in Richmond working with magazines such as Virginia Living. She has inherited talent from both Todd and Laraine.

“Everything Laraine touches is art; I can draw bricks; my daughter creates,” says Healy. “We’re proud of Lauren, pleased she’s able to make a living in a creative forum. My daughter is very much like her mother in never having an agenda. The two women in my life are pure of heart.”

In 2009, after nearly three decades, Healy felt an artistic, and practical, pull to do something new. “The economy was terrible. Old Town wasn’t selling, so I cut back on my production of Old Town and started hand coloring these prints.”

“These prints” are original antique prints from newspapers, books, or steel engravings of city and country views and maps, mainly in Virginia and along the East Coast. The process is no less time consuming than Healy’s Old Town art.

Todd’s friend John Benson suggested reproducing and selling them on the Internet.  “So I’m not as smart as I’d like you to believe.” Benson also named the new company, Capital Artifacts. Four years ago, Fernando Torrez (currently a candidate for City Council) built the www.capitalartifacts.com website. Rory McGlasson, a freelance social media consultant in Philadelphia, manages the website and Healy’s Facebook page. “He is the reason,” says Healy, “that Harper Collins found me on Facebook for Cokie Roberts’ book.”

Within five years, Todd Healy wants to sell Gallery Lafayette and work from a home studio, perhaps in Richmond, through the Capital Artifacts website. “Some of the stuff I do,” he says, “is almost good.”

“I don’t care if you’re a politician, a wife, a husband, an artist, anyone else—there’s three groups: mediocre, almost good, and genius,” Healy says.

Healy’s advice for new artists: “What I learned early is that if you don’t reproduce that image and sell it over and over, you can’t make a living. If you just sell the original, it’s gone.” Holding an image of the old Gilpin House Books, he adds, “I’ve sold this 150 times, and it’s almost good.”

The 36th edition of Todd’s calendar will be available the first week of November, and can be ordered through the Capital Artifacts website. The U.S. Capitol gift shop still stocks Healy notecards and puzzles.

The Ghosts of Alexandria 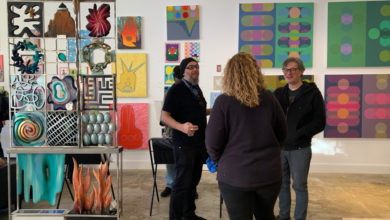 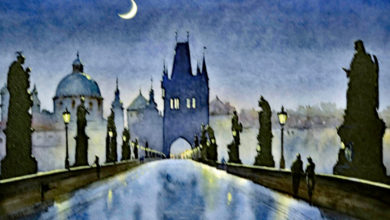 Postcards from the Palette: Summer Art Sizzles in Free for ALX