I am proud to announce that one of our favorite advertisers, Celtic House, 2500 Columbia Pike, was named best Irish bar in Northern Virginia by Yelp! If you haven’t been there, check them out on St. Patrick’s Day. They will be celebrating all weekend. Live Oak, 1603 Commonwealth Ave., is taking over the Monroe’s space. Executive chef duties will go to Justus Frank whose resume includes at Fiola in Georgetown, Copperwood Tavern, and Nonna’s Kitchen Frank is planning to charm the neighborhood with a Charleston-inspired menu. New owners are Frank, Jeremy Barber, and Tim Irwin. You may remember Irwin from Evening Star Cafe. Barber was the general manager and Irwin the bar manager at Del Merei Grille and Eventide.

Mike Anderson confirmed that he will be opening PTO Sea Food LLC at 333 John Carlyle St. Plans include seating for 95, a mini bar, oyster bar, and patio. It’s official, Mancini’s is becoming Junction Bakery & Bistro, 1508 Mt Vernon Ave. The name recalls the time when the area was dominated by the railroad. Noe Landini says they’ll preserve what Mancini started, at least in spirit. Junction will be an American bistro serving three meals a day while also being a commercial bakery.

Pines of Italy at 3111 Columbia Pike is becoming Purple Ethiopian Restaurant & Lounge. No word yet on when it will reopen. And, if you haven’t heard, Hank’s Pasta Bar, 600 Montgomery Ave. is now open. Nicolas Flores is leading the kitchen with a menu of seasonal Italian comfort fare including pastas, risottos, meats, and seafood. There is also a 20 seat lounge/bar.

I highly recommend your trying Let’s Meat on the Avenue, 2403 Mt. Vernon Ave. This neighborhood butcher shop features pasture-fed, free range, and hormone-free meat and poultry. I recently tried their ground chuck. The meat is ground from a single animal rather than scraps of meat from multiple animals as you find in the grocery store. The meat was flavorful and moist. Try some for your next round of burgers or meatballs.

It’s been a great month for dining out. I hope everyone enjoyed Alexandria’s Winter Restaurant Week. A group of Zebras went to three restaurants. Vermillion, 1120 King St., and Chef William Morris served up a wonderful three course meal. The chef accommodated one diner’s special needs with grace and imagination. We tried everything on the menu. We were first presented with an amuse bouche of crostini topped with crème fraiche and chopped tomatoes. The first course consisted of a cream of broccoli soup with shaved ham, pimento cheese, and spiced croutons. This was not your mother’s cream of broccoli soup. The flavor was fresh and light. We were tempted to wipe up the bowl with the wonderful parker house rolls. Speaking of parker house rolls, these little one bite wonders are a not to be missed treat. The winter chicory salad with thinly sliced pears, walnuts, pecorino cheese, and walnut vinaigrette was crisp and refreshing. The coconut braised pork belly with stone ground grits and charred scallions was rich with a crispy skin. The second course favorite of the table was the pan roasted rainbow trout served with spinach, fingerling potatoes, and lemon-caper brown butter. If it is on the menu, I highly recommend you order it. The blending of flavors was uncommonly good. The other two entrees were also delightful and included a seared bistro filet with mashed potatoes, trumpet mushrooms, Brussels sprouts, and a red wine jus. I would have a liked a better sear on the beef but it was still tasty. The bucatini pasta was equally delicious with a sauce of roasted garlic cream wild mushroom ragout, and charred peppers. The third course presented us with an Oreo silk pie with a vanilla ice cream and vanilla mascarpone. One serving of this rich chocolate dessert was enough for four people to share. Our favorite was the poppyseed ricotta fritters with a berry compote, vanilla ice cream, and vanilla bean mascarpone. This dessert was not as sweet and was the perfect ending to a wonderful meal. Dan, our server, made sure all of our needs were met. Spencer, our host did double duty making sure everyone was seated comfortably and the dining room service ran smoothly. Kristen, the manager, stopped by our table to check up on us too. The restaurant itself is warm and comfortable. The lighting was enough to allow us to read the menus. Would we come back again? Absolutely.

The Zebra herd descended on Restaurant Eve, 110 S. Pitt, and we were happily sated. From the time we entered until the time we left, we felt pampered and well taken care of. Our servers, Megan and Emily made sure all of our needs were met. We ordered cocktails and found that even the most common drinks were made extraordinary with special touches. Manhattans were garnished with restaurant roasted lemon peel. The old fashion included house made bitters and house marinated cherries. Our meal began with a delightful amuse bouche of a small bowl of fennel veloute garnished with a lemon confit and fresh black pepper. The soup was a wonder. I hope it is offered on the regular menu. Our meal was accompanied by crispy crusted house made rustic bread. You have to be careful not to fill up on this delicious bread if you plan to eat dinner. The first course brought a salad of heirloom beets with pickled cipollinis and feta yoghurt. Even a non-beet person like me found it to be delicious. The steak tartare with house made rye bread and a Worcestershire emulsion was a large and an over the top delight. Each bite on the dark rye bread was a revelation. The sashimi of hamachi with house made ponzu, wasabi, and pickled ginger was so good I hated to share it. Our main courses brought a beautifully pan roasted Chesapeake rockfish served with creamy polenta, lobster butter, and Swiss chard. Each morsel was perfection. The confit of Cheshire pork belly with Du Puy lentils, pommerey mustard, and cumin was amazing. The lemon flavored lentils were a perfect counterpoint to the darkly rich pork belly. The dessert course presented us with three delights from Joshua Jarvis to choose from. The Amano chocolate gateau with cocoa nib frozen yoghurt was a heavenly combination of chocolate offset with the tartness of the yoghurt. The warm sweet potato clafoutis with cognac prunes, toasted pecans, and butterscotch ice cream did not last long on the plate. Also amazing was the Virginia blackberry Pavlova with mascarpone and blackberry granita. Chef Cathal Armstrong created a wonderful combination of dishes which highlighted his talents with locally sourced ingredients. Restaurant Eve lived up to its reputation by offering a true sampling of menu items that you will want to return to eat again and again.

The final stop for the Zebras was Magnolia’s on King, 703 King St. Open since July, 2015, the restaurant is a work in progress. The dining room on the main floor is beautifully appointed. We were seated upstairs in the Palm Lounge which features a beautiful fireplace. The room was loud as it is used as a bar lounge area. Our server, Simone, was attentive and worked diligently to provide us with a lovely experience. Executive Chef Brian Rowe offers contemporary twists on Southern classics. We started our meal with potato leek soup garnished with candied bacon. The soup was rich and creamy, everything you would want in a soup. The grilled Carolina prawns with garlic grits arrived with three large shell on, head on prawns. The prawns were well seasoned and justified licking one’s fingers. The garlic grits were so good we wished there were more. We also wished we had been given a finger bowl or damp towel to clean our hands. Chef Rowe accommodated one diner’s request to substitute the mashed sweet potatoes for the macaroni and cheese offered with the house smoked fried chicken. The bone-in half chicken turned out to be a whole poussin, a very young chicken that looks like a Cornish hen. The breading was crispy and crunchy which enhanced the moist chicken meat. The sweet potatoes were smooth, creamy, and rich with cinnamon, nutmeg, clove, and molasses. The macaroni and cheese was moist with a rich cheesy sauce. The braised short rib pappardelle with pecorino cheese, red wine, and San Marzano tomatoes was a generous portion and not a drop was left in its serving dish. Our third course brought a s’mores break pudding with marshmallow ice cream. This bread pudding with lovely bits of melting chocolate was the hit of the table. The ice cream had the wonderful flavor of melted marshmallow. The happy wife dessert brought four beignets that could compete with most you can find in New Orleans. The café au lait ice cream was perfect. Our table was visited by Chef Rowe and Trish Wheeling, the Service Director. Both are working very hard to make Magnolia’s a favorite destination for Alexandrians.

If you would like our Foody Newz Editor to visit your establishment, please email: editor@thezebrapress.com 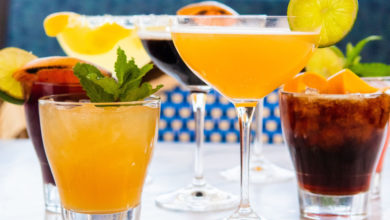 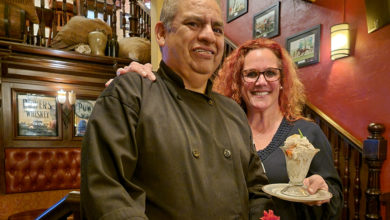 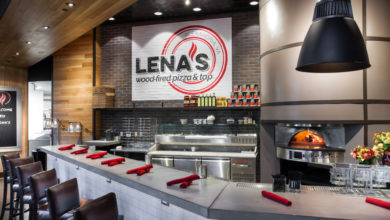 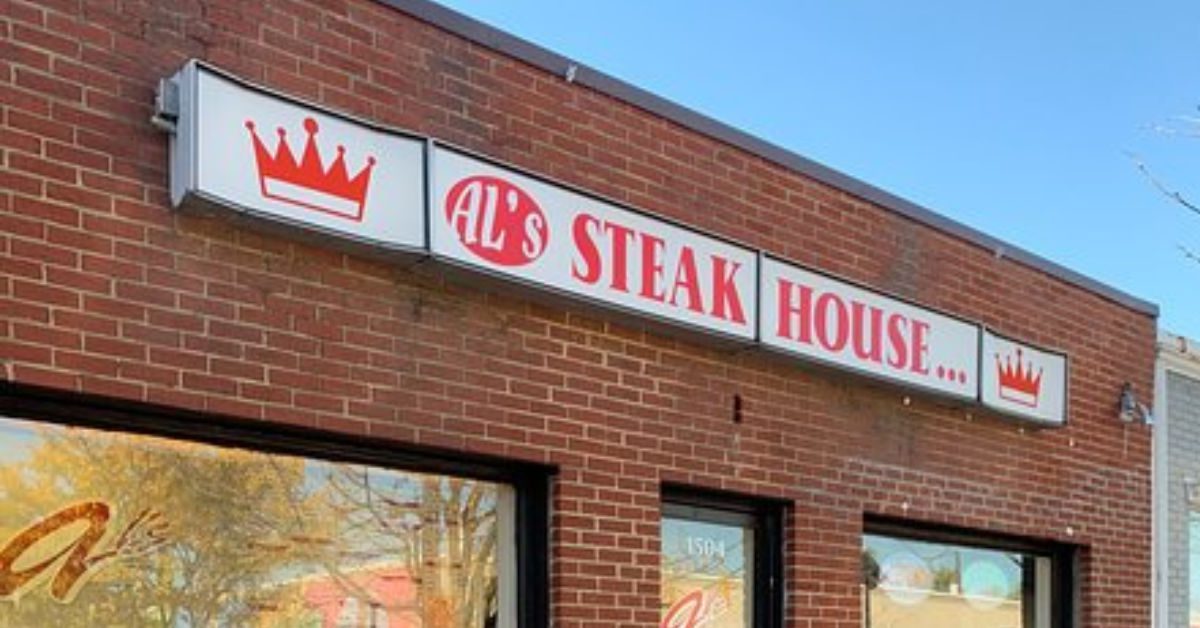