I must admit I came to see “The Fabulous Lipitones” at Little Theatre of Alexandria with little expectation of having an enjoyable evening.  However, I was wrong, wrong, wrong!  This show is, well, hilarious!  If you were a Gleek (one obsessed with the TV show, Glee), if you got a kick out of singing in your church choir or school chorus, or if you were or are currently an Alexandria Harmonizer, you will love this show.  An affectionate look at one of the geeky subculture niche obsessions that adherents live for, and about which others shake their head in bewilderment, the relatively new show by John Markus and Mark St. Germain, is written more like “The Music Man” than “Hamilton.”

The show opens at the funeral of the lead singer of a famous barbershop quartet, suddenly making it a trio.  Facing an impending competition, the remaining three must quickly find an experienced fourth “barber shopper.”  Let me hasten to say the setting is rural London, Ohio, 40 miles west of Columbus.  Barber shoppers are not to be found just anywhere in town, but luck is with them when an acquaintance from a local auto repair shop sends them someone to audition, and he turns out to be, well, different.  Actually, he is a seriously different, dark-skinned, full bearded turban-wearing Sikh, with a great voice and moves as they or we have never seen before. The men are first horrified; Phil (Peter Halverson) immediately thinks he’s a terrorist, but eventually comes to see that he’s truly living his faith and, yes, he’s somewhat different, but it doesn’t mean he can’t be a great addition to the group.

While this is going on, we are introduced to the three remaining singers of the original quartet, including the aforementioned Phil Rizzardi (Peter Halverson), who as a local blowhard gym operator has some of the best joke lines and lands every one.  He is also a terrific singer!  Another quartet member, the pharmacist Wally Smith, played hilariously by John Brown, has to admit to still living with his mother and trying to get on a pharmacist-only dating site with disastrous results, and then there’s Howard Dunphy, amusingly and touchingly brought to life by Jerry Hoffman.  His wife left him for another man but has recently returned quite ill (she says), and he agreed to take her back and care for her, though his friends think he’s a real patsy for succumbing.

Then, there’s Baba “Bob” Mati Singh played to perfection by Gurpreet Sarin.  The show’s choreographer, Grace Machanic, told me that Gurpreet came to audition late in the process.  However, when the director and others at the casting table saw, heard, and experienced the sheer joy of this actor for his work, there was no question of who would play “Bob.”  Grace said she asked him to hop across the stage, just to see if he could move.  Not only did he leap several feet in the air to begin, he then hopped across the entire width of the stage in three great leaps.  When they asked him to sing (he was in the top 40 semifinal round for Season 12 of American Idol), they were sold.

Much of the show is spent dithering about whether or not the group should go on singing the tired yet beautiful old songs.  But Phil really just wants out.  He has other fish to fry and this music, he says, “… is not dead, it’s extinct.”  Nonetheless, they perform some excellent examples of real barbershop numbers very well, and I expect as the show develops their close harmony will get surer, and the tiny glitches of Press Night will smoothen.  I spent several years singing at Walt Disney World where my dressing room was adjacent to the Dapper Dans, the World Champion Walt Disney World Barbershop Quartet many years over, so I’ve heard the best.  For men who never sang together or ever sang barbershop music until this show, their singing is surprisingly good, and their close harmony is just delicious!  Enter “Bob” and his Bollywood moves, and you’ve got something amazing!

The director, Chuck Leonard, and the choreographer, Grace Machanic, keep the show pace high and light, but with some interesting twists.  However, it’s the set designer, Matt Liptak, who won my heart.  He renders the set in perfect detail giving us a look at a 1950’s dream of a basement man cave still intact today, complete with wood paneling, football memorabilia from the glory days of high school, a butterfly collection, a detailed ship model, beer steins, an operating barber pole and, trust me, much, much more.  The set reveals the back story of these men, seemingly stuck in another century, perhaps light years away from us today.  The backstage crew’s evocative work, including colorful and age-appropriate costumes by Jean Schlichting and Kit Sibley, creative lighting by Marzanne Claiborne, challenging spot-on sound design by Janice Rivera, and delightful music direction by Abbie Desrosiers and James Myers complete the nostalgic look and feel of this delightful, thought-provoking evening.

“The Fabulous Lipitones” runs through May 13 and tickets may be purchased by calling the Box Office 703-683-0496 or by visiting www.thelittletheatre.com. 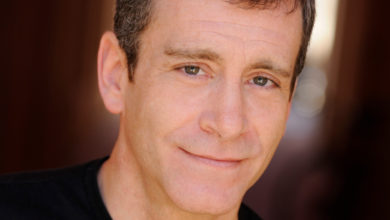 ‘Dear Evan Hansen’: A Coming-of-Age Musical in the Age of Social Media, Now at The Kennedy Center