“The Jungle Book” as it is being performed in Bethesda’s Imagination Stage is presented in such a way that it appears to be as timeless and as breathtaking as you imagined it (or as I did when I read it in grade school). I was afraid that I wouldn’t recognize my old friends, but lots of them are there and in the hands of these talented actors, I think Rudyard Kipling would be pleased to meet them.  The great life lessons are there, too, but in easy to understand words, music and action.  (There are also audience dance opportunities at the top of the show and just before it ends.)

“The Jungle Book” written by Rudyard Kipling in 1894 is thoughtfully directed by Janet Stanford, who is also Artistic Director of Imagination Stage. Greg Banks wrote the script based on the original Kipling story, which explores Mowgli’s relationship with his jungle family, the environment, and his responsibility to both.  His lively, gently updated version deals with timely issues in a way that everyone can understand.  The children in the audience on Press Day sat in mostly rapt attention.  If children get grumpy and can’t sit still, Imagination Stage has a “quiet room” with windows on the right side of the audience where a parent or caretaker can take the child until it gets settled, but while they are soothing the child, the adult and child can still see and hear the show.  It’s best for ages 4+ and trust me, adults will love this as much as children!

Mowgli (Justin Weaks) is a human child brought up in the jungles of India by a family wolves (Nora Achrati as Mother Wolf and Ryan Andrew Mitchell as Father Wolf). The embittered tiger Shere Kahn (Ricardo Frederick Evans), may be stalking him, but Mowgli is a quick learner.  His friends, Baloo (Ryan Andrew Mitchell) the goofy bear, and Bagheera (Latia Stokes), the savvy panther, teach him how to gain the trust of the four-footed hunters, the birds, and the snakes so that he will never be friendless.  He falls into a bad crowd of silly monkeys who lead him astray and play a mean trick on him, dropping him down a well.  The story turns on how Mowgli is able to escape the well, the tiger and the wolf pack, after the tiger turns the wolves against him.  Mowgli learns to respect his environment and the wisdom of the animals.  And he realizes that, as a grown man, it’s his responsibility to protect them.

This is a marvelous adventure tale full of fantastical creatures in fanciful and beautiful costumes that I think even the littlest child will recognize as a scary tiger, assorted mean, dim-witted, and funny monkeys, a wise panther, and even a gorgeous, but terrifying rock snake with a beautiful cobra-like hood, stunning glittery harem pants and a fabulous colorful silk scarf extension for her arm representing her sinuous body. I want that outfit!  But enough about me!  Each of the actors play multiple parts and part of the fun for an adult is to see how the inventive costume designer (Kendra Rai) dresses each animal for these instantaneous changes.

All of the actors bring it to this show in ways that are surprising.  Each one must make quick changes, sometimes even onstage to become another character.  It is all so seamless, however, the audience immediately feels comfortable with whatever the actors must do to become another fantastical animal.  Kudos to the choreographer, Jaya Prasad, for the non-stop action that surely engages the imagination of every child in the audience, and  the composer, Eric Shimelonis, for incorporating music seamlessly into the show and keeping the excitement always on a high level.  The same could be said for the sound and lighting designers, Patrick Calhoun and Sarah Tundermann, and especially the scenic designer, Daniel Ettinger, who make the stage, which at the opening of the show, appeared  dark and a little forbidding, into an exciting world of jungle colors filled with intriguing indigenous sounds and music.

Special notice, however, should be given to (Mowgli) Justin Weaks, who is making his Imagination Stage debut. He appears to have no bones in his wiry, lithe body.  When he plays Mowgli as a child, he IS a child!  And as he grows older, stronger and wiser, he totally inhabits those ages.  He is marvelously in touch with his body and character, leaping, jumping, and howling like a wolf.  In fact, every time he or the wolves howl, the audience erupts with joy.

Space prohibits me from going on and on about each of the five gifted actors in this show, but suffice it to say, they made me a believer in Mowgli’s tested ability to learn from his adventures. Though I missed my favorite character from childhood, Rikki-Tikki-Tavi, I was very satisfied with this afternoon’s adventure and I know my family, who are attending a show as a group later in May, are going to love it just as much as I did!  I highly recommend this performance to young and older and even the really old!  It’s a simply lovely, sometimes heartbreaking tale, but in the end, Mowgli discovers what it means to be human and so do we.

Performance Time, Place, and Ticket Information: “The Jungle Book,” best for ages 4+, runs April 22-May 28, 2107 in Imagination Stage’s Annette M. and Theodore N. Lerner Family Theatre.  Tickets start at $10 and can be purchased online at www.imaginationstage.org , at the Imagination Stage box office, 4908 Auburn Avenue, Bethesda, MD 20814, or via phone at 301-280-1660.  Group rates are available. 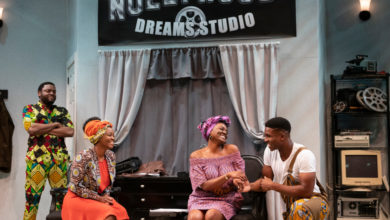