A musical couple takes a chance and adds their kids to the band, with exceptional results.

Annie and Steve Sidley had a choice. 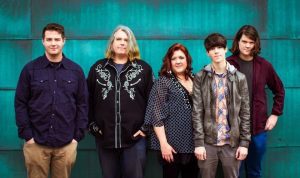 The two already accomplished DC-area musicians could have kept going the way they were going, doing well-received solo projects on their own and collaborating on each other’s records, all while using various musicians they know to fill in the gaps. A soulmate duo plugging away to see if they can find that elusive golden road forward in an ever-challenging business.

Sure, they could have chose to stay that course, keep it just the two of them.

But why do that, when you have three talented, energetic musicians you can add into the mix hanging out right in your own home.

That’s right, recently The Sidleys times two officially became The Sidleys times five, and the results shine brilliantly not only at their frequent live performances, but most glowingly, on their superb latest record, The Love You Make, a title that fits this family to a tee.

“When the kids were little, obviously we played music and they listened to a lot of music,” Steve Sidley told me as he sat with wife Annie and two of the three new band members. “But we never really thought this was gonna happen. People would tease us, ‘Oh you guys are gonna be the Partridge Family and this and that. Oh look at you, you’ve raised a little rhythm section.’ So we really had no inkling that it was gonna go this way. But then all of a sudden, they just got so good. And they wanted to play with us. Which is great, ‘cause I know a lot of musician friends tell me that music is the thing that separates them and their kids.”

Given the chemistry that the five Sidleys seem to have both on stage and in studio, it seems like Annie and Steve’s choice was a very good one. The already well-written and well-composed soul rock music the two had carefully cultivated has only seemed to grow stronger with the addition of their three sons into the band. The Love You Make continues the rock soul atmosphere The Sidleys have soared in previously, but with a boost from the boys, this record flies higher than anything they’ve ever done before. It’s a stunning mix of vintage 70’s-style soul rock and roll, with a contemporary jazz-tinge.

“We just love music,” Steve said. “And we love listening to music. And (the boys) introduce us to stuff and we introduce them to stuff. It’s like this great cross-pollination, they have excellent taste, which I mean, as an artist, really is that indispensable thing.”

This was all a risk of sorts for Annie and Steve, although they don’t really view it as such. But no matter what, you never know if adding new musicians to the mix, let alone ones you raised from birth, will help or hinder the tone and feel of your sound and the intricacies of the process. But one listen to The Love You Make, and you can plainly see that everything seemed to gel.

“This record really represents a whole new thing for us,” Steve said, “because our first record, Bittersweet, which came out in 2013, that was really just Annie and me. It was really sort of a duo kind of expanded into a band. With this record, it was the first time that it was really, I mean, the whole family. Sean. Colin. Ian. It was really a family thing.”

“Yes, it was a band,” reiterates Annie. “They’re our band, and they truly gave the record energy that it wouldn’t have had otherwise. They came up with their own parts and everything.”

Annie and Steve obviously grew up with some different musical influences than their boys, but the blend of young and…well, not old, but older…meshes beautifully.

“Instead of me layering a whole bunch of stuff,” Steve added, “it was them bringing all these great influences and styles and sounds to it.”

“I’m the one who comes up with the ideas for the songs,” Annie continued, “so they tend to be kind of influenced that way, some of my biggest influences are Stevie Wonder, Prince, Chaka Khan, definitely old school soul. But the boys brought a lot of really cool contemporary neo-soul acts into the mix. I’ve truly enjoyed listening to and being influenced by that.”

When the Sidley parents asked the Sidley kids…er, young men… to join their band, there was a bit of anxiety, but once recording started, things fell into place as each contributed their own style to the project.

“When I got on board with (doing the record), I really had no idea what I wanted to do with it,“ said keyboardist Ian Sidley. “I was actually a little caught off guard that my piano was gonna be on record. I was like, ‘Oh, I’m not ready for this.’ Looking back, I feel like I would have added more to the album harmonically now than I did then, but I definitely think it was a step in the right direction.”

Ian’s brother, bassist Colin Sidley, also used some of his own  influences to pop his own vibe onto the record.

“Jazz bass is really the fundamentals of R & B,” Colin said. “Motown’s James Jamerson is one of my biggest influences personally. Sometimes I just took that kind of style and feel ‘cause I thought it needed sort of a Motown vibe to it. And there are a few times in there when I conjured up some Jaco (Pastorius). And even some of my own thing.”

Did the Sidley boys feel any sort of pressure from their exceptionally talented parents during the recording process?

“There wasn’t a lot of pressure except for internally,” Ian said, “and I think sometimes, that internal pressure can push me to create. But one thing, since (we recorded) at home, sometimes that also kinds of works against me, because I’m like, ‘We don’t have to do it right now, we can do it later.’ “

“My parents are very good musicians,“ added Colin, “so I was like, ‘How am I gonna compete with this?’ But the recording itself was fairly easy because we practiced through a lot of this stuff before. So we just went in there and recorded. And there were moments when I stayed a little longer ‘cause I’m like, ‘I didn’t do a good job, let’s try that again.’ I just wanted it to be the best I could make it.”

“Someone asked us not too long ago,” adds Steve, “they said, ‘Oh you must be hard on your kids because they play so good and that’s why.’ And I’m like, ‘No, we’re not hard enough.’ We’re usually talking them down, like, ‘No, really, that was a really good solo.’ ”

So what happens if and when any of their new band members go off to college? Will that mean the end of the now vaunted Sidley Family version of the band?

“I mean, no matter what, there are always gonna be Sidleys,” Steve said. “But thinking practically, we don’t know what that means in a year. If Colin ends up going to school not too far away, he can probably still play some gigs with us. If he goes far away, that’s much more complicated. Ian’s talking about going to Colorado. What that all may mean is we do a few gigs a year as a family when everyone’s around, and then we do other things in a different grouping with some different musicians. We’ll see.”

Ian interjects, “I mean, I personally just tried to get as far away from them as I could,” a remark followed by loud guffaws of laughter from the others.

All in all, Annie and Steve Sidley know that bringing their boys into the fold was a decision that could change the dynamic of the band, their sound, and also possibly the fabric of their family. But if The Love You Make is any indication, all is going beautifully, no matter what The Sidleys create together. The love you make…starts at home.

“When we did this record,” Steve says proudly, “I had no idea what recording would be like because we never did it (with the boys) before. I thought, ‘Is this gonna be problematic, or take longer?’ Well, it’s just been great. They’re honestly the best band we’ve ever had.”

“I enjoy playing with our family so much,” Steve continues, with undoubtedly an adoring look cast towards his fellow Sidleys.    “I just always know it’s gonna sound great. So I’m trying to look ahead and see this as an opportunity, while at the same time, I have no idea how it’s all gonna pan out. But luckily, we’ve never planned anything before…so why start now.”