The T.C. Williams crew team competed in two different regattas on Saturday, April 21, as rowers hit the season midpoint and continue to train their minds, muscles, and mojo for postseason regattas, including the Virginia State Championships in May and elite rowing events in Pennsylvania, New Jersey, and Ontario, Canada in the following weeks.

The TC Women returned to St. Andrews School in Delaware for Noxontown Regatta #4, featuring rowers from a few of the nation’s elite rowing programs. The Titan Men were closer to home, competing against 32 high schools and over 250 boats in the Ted Phoenix Regatta on the Occoquan Reservoir.

Weather conditions at both locations were excellent, providing rowers with ideal opportunities to test their strengths and identify areas to improve during two-a-day practices as the season reaches its zenith.

At the Ted Phoenix, the TC Men’s First 4+, composed of Senior rowers Stefanos Psaltis-Ivanis, Connor McGivern, Jake Souza, and Ian Willmore, and coxswain Michaela Gleeson, won their early afternoon heat over four other boats to secure a lane in the finals with a time of 5:32.30, beating Mt. Vernon by 11 seconds and West Potomac by 14.

In their late afternoon final with sunny skies and a light breeze, for the first 1000 meters the TC Men evenly battled Forest Park and South County, which placed first and second, respectively, in their qualifying heats. For the last 500 meters, Gleeson raised the stroke rate and the Titans steadily gained the lead, finishing with a winning time of 5:27.10 and open water between their boat, South County (5:32.47), and Forest Park (5:36.60).

“We had a lot more time on the water this week” said Souza, “so it’s nice to see the hard work pay off.”

“It was nice to win this week,” added Psaltis-Ivanis, “but we still have a lot of work to do before the state championship.”

The TC Men’s Light 4+ placed third in their final behind Stuart and Forest Park with a time of 5:41.51. TC Men’s 8-seat boats at the Ted Phoenix all “raced up” against more seasoned boats, preparing them for the stiff competition they will face in postseason contests.

In Delaware, the Titan Women’s First 8 faced off against national powerhouses Merion Mercy and Kent to place third in their final with a time of 5:18.6.  The Women’s Second 8 stroked another spirited race, placing second and only 1.2 seconds behind host St. Andrews with a time of 5:20.0, and 1.2 seconds ahead of third-place Kent.

Among junior boats, the Titan Women’s Frosh 8A and 8B boats competed in the six-boat Frosh 8 category, securing first- and third-place finishes, respectively. The TC Women’s Frosh 8A boat, composed of rowers Riley Bucholz, Libby Padilla, Mackenzie Allen, Kaitie Dennis, Wellesley Snyder, Grace Yokitis, Adrienne Carter, and Halle Reinholtz, and coxswain Caroline Miles, posted a winning time of 5:32.7, followed by Merion Mercy at 5:43.8, and TC teammates in the Frosh 8B at 5:46.2.

The Titan Women and Men are back together on April 28 for their final regular-season races at the Charlie Butt Regatta on the Potomac River near Georgetown.

Alexandria Mayoral Debate Scheduled for May 2 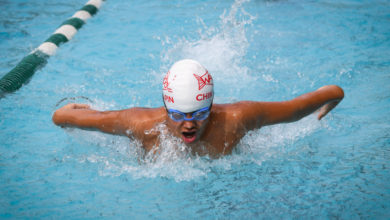