When David Brewster raves about chocolate milk burbling in the sunshine in a 1.9-million-gallon, rectangular tank, he’s not referring to that smooth, sweet, chocolaty beverage that every youngster loves to slurp. He’s talking about sewage — 13 billion gallons of brown, murky, watery sewage. Standing over an Alexandria Renew metal settling tank, he waxes effortlessly through the multiple wastewater treatment steps that clean up Alexandrians’ dirty water before the plant discharges 13 billion gallons into Hunting Creek every year.

When Alexandrians flush their toilets, depending on the location, between two and eight hours later, AlexRenew treats that water and discharges it into Hunting Creek next to the Beltway/I-95. That water has to go somewhere and by law, it cannot pollute Northern Virginia’s waterways. AlexRenew cleans it up.

Why do wipes give him headaches? Unlike toilet paper, these flimsy little toilettes do not break down when flushed. They can combine with fats, oils, grease and other trash in the sewers and clog up pipes, pumps and other equipment and cause sewer line blockages, which can lead to sewer backups in homes and businesses and cause manholes to overflow. Most wipes do not disintegrate quickly in the sewer collection system.

Every day, the average Alexandrian produces around 85 gallons of wastewater (the average American produces 100 gallons, equivalent to two bathtubs). Most of that water goes to AlexRenew. In what are called the preliminary and primary water cleaning systems, plant processes remove approximately 85 percent of the solids or non-water materials through screening and settling. In the next or secondary phase, biological microbes do further cleaning and convert ammonia to harmless nitrogen gas, which exists naturally within the atmosphere. The third or tertiary phase uses settling tanks and sand filters to clean it even more and send it to high-heat, ultra-violet light treatment (U/V) that renders harmful bacteria harmless. Another process collects solids from the bottom of each of the settling tanks, pasteurizes them to remove bacteria and sends them through tanks called “digesters” that work like giant stomachs to reduce the volume of solids and remove water. Other processes treat smelly air, “scrubbing” odors out before releasing air into the atmosphere.

Development, human activity, industrial processes, agriculture, the engines of human life, all can produce pollution. With these multiple stressors and inputs, water cannot heal itself and various laws limit pollution discharges to keep water healthy. The 1972 federal Clean Water Act set as a goal to “restore and maintain the chemical, physical and biological integrity of the nation’s waters.” Like all other treatment plants, AlexRenew must meet certain requirements to get operating permits.

Wastewater treatment’s processes primarily target nitrogen and phosphorus reduction. “Elevated levels of the nutrients, nitrogen and phosphorous, are the main cause of poor water quality in the Chesapeake Bay,” says the Chesapeake Bay program’s website. Nitrogen in the form of ammonia, if discharged, can deplete oxygen and stimulate excessive algal growth. Phosphorus also can encourage harmful algal growth. Untreated wastewater is harmful to humans, fish and other wildlife. After all, who wants to swim in sewage or drink dirty water?

The Plant and Its Mission

AlexRenew evolved from the Alexandria Sanitation Authority, created in 1952 by the city council. It is a public utility governed by a citizen, council-appointed board. With a budget of $70.4 million, it serves 320,000 customers in Alexandria and parts of Fairfax County. Throughout the city there are four pumping stations and two service chambers which act as small pumping stations. AlexRenew manages 16 miles of “superhighway” pipes that carry water to the plant. Smaller pipes and sewer systems connect homes and businesses to the larger pipes.

The 22-structure, compact campus is squished in between the Beltway/I-95, Payne Street, the city jail, Limerick Street, Holland Lane and three cemeteries on the south end of

Alexandria. At 35 acres, it’s small compared to most sewage treatment plants that sit on at least 150 acres.

Four to five licensed operators per shift monitor operations and adjust cleaning processes throughout the campus. In the control room, one or two employees constantly monitor six large digital screens and five work stations while others are out on the campus monitoring equipment operations and taking water samples. Other staff check the four pump stations located throughout Alexandria.

Operating 24/7, 365 days a year, AlexRenew processes 35 million gallons of dirty water a day, for which residential customers pay on average $44 a month.

Wastewater is mostly water. From what enters the plant, influent, to what returns to Hunting Creek, effluent, a carefully orchestrated process involving biology, chemistry, engineering, technology and human expertise ensues.

Wastewater that comes in contains solids, dissolved or suspended, the detritus of human waste and activities, materials like food scraps, sticks, trash, clothes, sanitary products, toys, wood, rocks, clothes, oil and grease. The wastewater moves through series of coarse and fine steel and iron screens to capture the solids. Then, it goes through a series of tanks, where sediments settle to the bottom. The plant removes 85 percent of non-water-soluble solids. In a series of processes, the water further settles and another process heats the solids to 160 degrees to pasteurize or cook out the pathogens.

Operators are especially proud of their “red bug” process which uses anammox bacteria, naturally-occurring microbes, to basically eat nitrogen. According to Lisa VanRiper, Director of Communications, AlexRenew was the first to adopt technology to reduce nitrogen costs effectively using microbiology and launched the first large-scale use of ultraviolet disinfection, now the standard in the nation’s 14,800 water-cleaning facilities. Using microbes saves energy and money because it uses fewer chemicals and reduces polluting trucks on area roads. Driving these innovations are high levels of water quality desired, small acreage for treatment and a small, urban location, company officials argue.

A major treatment target is nitrogen and phosphorus because of discharge limits and permit requirements by the Virginia Department of Environmental Quality and the federal Environmental Protection Agency. Chesapeake Bay localities are also subject to a regulation called “total maximum daily load” (TMDL). Nitrogen and phosphorus primary causes of algae blooms in waterways that can harm fish and other aquatic life.

Wastewater treatment produces treated water and biosolids. AlexRenew separates biological organics from the water, pasteurizes them to eliminate germs and in 2017 made 5,500 dry tons available to 50 farmers in 28 counties to enrich soils.

Alexandria is preparing a plan to revamp what’s called “combined sewer overflow,” a century-old system in which stormwater and untreated sewage flow into the same pipes and during many precipitation events, overflow into local waterways. In 2017, the Virginia General Assembly passed and then-Governor Terry McAuliffe signed a law requiring the city to submit a remediation plan to the state by July 1, 2017, and complete construction by July 1, 2025. The draft plan envisions a new network of tanks and tunnels that during wet weather will store excess combined sewage and send it to AlexRenew for treatment and discharge. AlexRenew will upgrade its existing processes to accommodate additional flows.

AlexRenew strives to give back to the community. Alexandria firefighters and police train on the plant’s grounds. A multi-purpose, public field atop the 18-million-gallon nutrient management facility is used daily and managed by the Alexandria Recreation Department.

The grounds have a native plant, wildlife garden created with the help of master gardeners and Audubon-at-Home volunteers. Managers offer the administrative building’s rooms for community events.

In an on-site laboratory, staff conduct 10,000 water tests a year to continually monitor and analyze the plant’s operations. “We don’t ‘guesstimate’ anything,” insists Brewster.

A key measure of success, managers say, are removal rates. They report that they remove 99.5 percent of phosphorus and 95 percent of nitrogen, a rate that exceeds regulatory requirements. The 2017 annual report states that for nitrogen, the permit limit is 500,690

Since AlexRenew discharges into Hunting Creek, managers have contracted with George Mason University (GMU) scientists to analyze the creek’s health. Despite some impairments, “Hunting Creek nonetheless exhibits many features of a healthy aquatic system such as lush beds of aquatic grasses, migratory and resident fish species, and many species of crustaceans, mollusks, and other invertebrates,” contends R. Christian Jones, Professor and Director of GMU’s Potomac Environmental Research and Education Center.

In a November 2017 presentation to the Friends of Dyke Marsh, a GMU scientist, Dr. Kim de Mutsert, reported that her team has found fecal bacteria in the creek, but she described Hunting Creek as “a very resilient ecosystem,” representative of the freshwater tidal Potomac River.

Pathogens can end up in stormwater from sewage and animal waste. AlexRenew’s ultra violet disinfection (UV) light process was created to render harmful bacteria harmless before it is released back into our waterways. “We consistently meet or exceed the E. coli and other substance removal requirements from DEQ in our water cleaning process,” says VanRiper.

DeMustert also found micropollutants like acetaminophens, caffeine, nicotine and anti-depressant medications from human use products in Hunting Creek. Most U.S. wastewater treatment systems cannot remove pharmaceuticals, but research on treatment methods is underway. Do not flush medications down the toilet, plant managers advise, and take unused pharmaceuticals to drop-off sites on drug take-back days, they urge.

Many rivers once frequently suffered from low-dissolved oxygen, fish kills, algal blooms and bacterial contamination. Former U.S. President Lyndon Johnson in the 1960 declared the Potomac River a “national disgrace.” The “nation’s river” was polluted, unswimmable, unfishable, an embarrassment. In 2012, American Rivers named the Potomac as America’s “most endangered river.” In March, the Potomac Conservancy gave the river, today’s drinking water source for five million people, its highest grade ever, a B, up from a D in 2011 and C in 2013, though noting that problems remain.

Bill Dickinson, Secretary-Treasurer of the AlexRenew Board of Directors and a customer, commends the plant’s work and applauds the staff: “I take comfort in knowing that we have a very dedicated, experienced and skilled workforce protecting public health and our water environment.” Plant managers boast about their employee apprentice program that nurtures a pipeline of loyal employees.

AlexRenew Shift Leader and T.C. Williams graduate Ronnie Bond has seen it all up close, going to the river as a youngster and working all over the plant for 27 years. His memory of fishing at Jones Point with his dad in the 1970s is tainted by the “awful smell” of dead fish floating in the Potomac. Working at AlexRenew and cleaning up the water feels especially purposeful to him. “I’m making an impact,” he boasts. 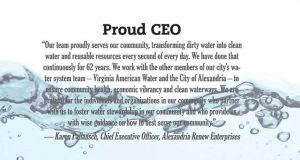