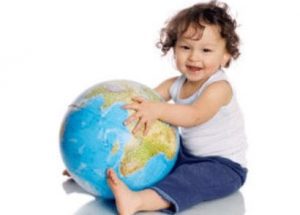 One of the joys of my job is meeting families from around the world. I enjoy learning about child rearing traditions in different countries, such as traditional first baby foods. These first foods are often based on the starches most readily available in a given region. Other local foods may be added to the starch to make a porridge with increased nutritional value.

Here are some global feeding traditions I have learned about through conversations with parents and grandparents of children in our practice. I have noticed that many of these traditions include an added source of iron, one of the most important nutrients for young children’s healthy development.

It is common to make a rice porridge called “congee”. Rice is cooked in a large amount of water until it is fully disintegrated. Meats as well as vegetables may be added, particularly as the baby gets older, to add additional nutritional value to the rice porridge.

Babies in some parts of Africa are fed a soft food known as “fufu”. It is made from the flour of plantains, cassava or corn, depending on the region. This can be mixed with varying additional ingredients. For example, a mother from Togo told me that parents there add a traditional dried fish to the fufu. A mother from Cameroon discussed the addition of dark green vegetable leaves, such as the leaves of the sweet potato plant. These are cooked with the fufu, providing additional iron and other nutrients.

Families in India often give lentils to young babies. This is particularly true in regions where families are vegetarian for religious purposes. At first, the lentils are boiled and the water may be removed, mixed with salt, sugar and clarified butter and fed to the baby. As the baby grows older, the mixture is made thicker and vegetables as well as rice are added. A food commonly fed to babies is called “khichri”. It is made from lentils mixed with spices and salt and pressure cooked, making it very soft and easily swallowed. Legumes like lentils are an excellent source of both protein and iron.

A father from Bolivia described to me that, when his mother came to watch his baby, she brought with her ground black corn meal. She had grown this black corn and ground it herself. She made the baby soup with vegetables and, sometimes meat, which she then thickened into a porridge using the ground corn meal.

As families feed their infants for the first time, it can be reassuring to note that there is no single “right” way to feed a baby. Across the world it is done many, many different ways! By choosing mild starches with supplemental sources of vitamins and iron, babies learn to transition from milk to solid foods and receive the nutrients needed for healthy growth and development.