Alexandria, VA – Virginia Governor Ralph Northam appeared in Alexandria on Tuesday to announce his amendment to a law that would outlaw holding a cellphone while driving. Backed by a number of Democratic state legislators, Northam said that his amendment to Senate Bill 1768 would expand the law to the all roadways in the Commonwealth. He also reiterated that he will not resign in the wake of a controversy that gained national attention and widespread criticism from the Democratic party.

“Most of us agree that it is time for people to use hands free technology while they’re driving,” Northam said at Market Square in front of City Hall. “Using a phone while driving not only takes your eyes off the road, it distracts your mind as well, and that can be just as dangerous. With these amendments, Senate Bill 1768 will help us build a positive traffic safety culture in the Commonwealth, and it will save lives.”

“I drove up this morning and I have double digit anecdotal situations that I can share with you from [Interstate] 95 this morning, including the gentleman that passed me in the left lane with both hands on the wheel using his thumbs – not just reading, which I saw several – but using his thumbs going by me at least 80 miles an hour,” Mason said.

In May 2011, Joy Rowley lost her 19-year-old son Kyle to a distracted driver along Route 7 in Herndon. She thanked Sen. Scott Surovell (D-36) for being her son’s champion and being there for her family.

“My son Kyle would have turned 27 this March 29… A parent should never have to remember when their child died,” Rowley said. “Kyle was 19, funny, had lots of friends, loved to cook, played several instruments and just completed his freshman year of college. … Please remind your loved ones never to drive distracted.”

There were 843 fatalities on Virginia’s highways in 2017, and 208 of them involved distracted driving.

It was the first visit to Northern Virginia for the governor since the he, Lieutenant Governor Justin Fairfax and Attorney General Mark Herring came under fire for a string of controversies that gained national attention in February. The governor stepped off the Market Square stage after the event and spoke with reporters about his decision to remain in office despite widespread calls for his resignation.

“I have listened to a lot of leaders around Virginia – faith leaders, community leaders. I have learned a lot. I still have a lot to learn. The more I know the more I’ll do,” Northam said. “We have a lot of inequity still in Virginia. Things like access to education, access to healthcare, access to employment opportunities to the voting booth. So we’ll focus on those and I really think we’re in a good position. There’s a level of awareness of regarding race and equity right now in Virginia that we have never seen, that I have never seen in my lifetime, and I’m going to do everything along with my cabinet, along with my agencies to really bring some good from the events that happened six weeks ago.”

In February, Northam apologized to Virginians for appearing in blackface next to a person wearing a Klu Klux Klan outfit in his medical school yearbook. He later backtracked and denied that he was in the photo and went on a listening tour of the state. Northam also said that he supports Lieutenant Governor Fairfax, who is accused of multiple cases of sexual assault, and Attorney Gen. Herring, who admitted to appearing in black face when he was in college.

“You know, the lieutenant governor is dealing with some issues, as is our attorney general. And, you know, I think the truth needs to be told and I do, I support him and and Attorney General Herring,” Northam said. “Again, we were elected in 2017 to do the job of Virginia, and they’re doing their job, and they’re doing their job as am I and will continue to do that.”

Don’t Miss: Gene Rossi Is Mad As Hell, And He’s Thinking About Running For Office Again

Saslaw said that aside from the blackface incident Northam has led an “exemplary” life.

“This happened 35 years ago, and look at this life since then,” Saslaw said. “The pictures were obviously distasteful and demeaning. I don’t think anybody would deny that. But since then, he’s led an exemplary life. And what’s interesting is the people who wanted him just put up against the wall and shot were the people who email me over the years, saying we need to get people who are even in prison a second chance, which they didn’t want to do with him.”

Saslaw said that Northam, Fairfax and Herring remaining in office will have little effect on the upcoming elections in November.

“People aren’t going to go into the voting booth and say, because Ralph had blackface 35 years ago, they’re not going to vote for a Democrat,” he said. “I mean, particularly given the huge gap with respect to civil rights, the GOP doesn’t exactly have the best record when it comes to that. So I know I don’t see that.”

Surovell said that he does not believe Northam is in the photo and that it will affect the upcoming elections in the General Assembly in November.

“None of this has an effect on his ability to veto bills or make amendments,” Surovell said. “I think over the last two months a lot of us have been willing wanting to give [Northam] some time to get out the facts of that whole situation. And I think we’re going to find out more as time goes on. And I think a lot of people’s concerns will be allayed once we find out more about the situation that led to what happened in February.”

City Councilor John Chapman said he still wants the governor to resign, but that if he is going to stay he might as well do his job.

“He’s doing his job as governor. And while my call still stands, if he’s going to remain the office which is seems he is, we want him to do the work of the people,” Chapman said.

The Virginia General Assembly will reconvene on April 3 to consider the governor’s vetoed legislation and recommendations. 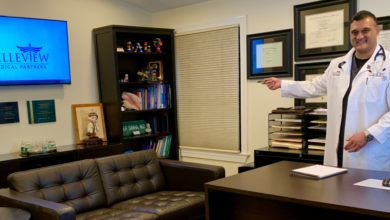