Alexandria, Va – The Light Horse, one of Old Town Alexandria’s favorite neighborhood taverns on King Street announces Joint Chiefs Night, a celebration and honoring of the history of the military, veterans and those who serve.  With Memorial Day approaching, Joint Chiefs Night begins on May 1 and continues exclusively on Wednesdays from 4 p.m. to 10 p.m.

The Light Horse will feature five cocktails, each a tribute to a branch of the military and each with a story to tell.  Enjoy The Harry Lee, which is made from Ketel One vodka, Midori Melon Liqueur, honey cinna-mint simple, house sour, and egg whites. Harry Lee is the namesake of The Light Horse, protégé of George Washington, Revolutionary war hero, father of Robert E. Lee and a native of Alexandria. The Gineral, made from Strange Monkey gin, elderflower, house sour, childhood memories, and lavender bitters is a take on the nickname of The Light Horse partner and Marine Capt. Kevin Penn (Ret.) “The General.”  The Admiral Gelman, Goslings Black rum, Domaine de Canton ginger liqueur, not-so-simple simple, and lemon juice is a nod to the Navy, named after Gelman, a friend of The Light Horse owners.

The Phantom Warsaw, Jeremiah Weed bourbon liqueur, blueberry more simple, house sour, Triple Sec, and egg whites is named after the longtime fighter utilized by the Air Force, the F-4 Phantom and Warsaw, the call name sign of Owner John Jarecki’s father, Capt. John Jarecki, an F-4 pilot. The D.A.M., Bare Knuckle straight bourbon whiskey from Manassas and Coast Guard founded Fair Winds Brewing beer is named after Douglas Albert Munro, the only Coast Guardsman decorated with the Medal of Honor for an act of “extraordinary heroism” during World War II.  He was killed in the Pacific Theater while using his boat to shield a boat full of Marines that was taking Japanese fire. He saved about 500 Marines.

Guests will be given a Light Horse punch card to track their purchase of each drink on Wednesday nights.  After trying each cocktail, they will receive a custom designed challenge coin from The Light Horse.  In a decade’s old military tradition, challenge coins are proof that one is a member of a unit or served on a specific tour duty, attestation that one is a member of an elite group of people.

Cocktails are $13 with $1 of each featured drink goes to The Tragedy Assistance Program for Survivors (TAPS), a non-profit organization that provides care and support to families and friends grieving the loss of a member of the armed forces.  The Light Horse Operating Partners John Jarecki and Kevin Penn have been active members of TAPS for many years.  Jarecki is a survivor and Penn is a D.C. based retired Marine who has been a mentor for a decade, and he was recently named by TAPS as Mentor of the Year for 2019.

Guests with a military I.D. receive 15% off their entire bill.  The full menu including salads, small plates, appetizers, sandwiches, entrees and bar snacks is available.

The Light Horse is located at 715 King Street.  The Old Town Trolley stop is directly in front of the restaurant.  Hours are 4 p.m. to 10 p.m. daily. The restaurant also offers a late-night menu nightly, from 10 p.m. until close.  The upstairs bar is open daily, from 11 a.m. to 2 a.m. For more information please call (703) 549-0533 or visit www.thelighthorserestaurant.com. 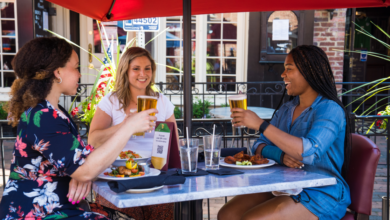 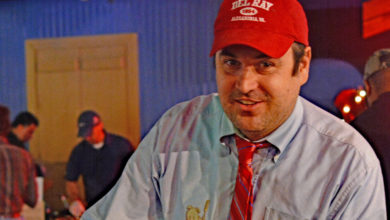