ALEXANDRIA, VA – T.C. Williams Boys Varsity Basketball starts with an impressive 5-2 record through their first seven games under the helm of second year coach Darryl Prue. If you look at their schedule you will see that one of their wins came on Dec. 12 against a team you probably don’t recognize: Doncaster.

You may be asking yourself, “Where is Doncaster? Is that somewhere in Maryland?” No, Doncaster is a team from Melbourne Australia that came to the United States to play T.C. Williams in an exhibition game, as part of a school trip.

The game not only provided the both teams an opportunity to face a different style of play, but more importantly gave the students an opportunity for cultural exchange. Some of the Doncaster players were even hosted by the families of the T.C. Williams players.

The Zebra caught up with Jack Trewella, coach of the Doncaster team, and Faculty Liaison, Ely Stewart, for a brief Q&A:

The Zebra: What was it like coming to the US?

Amazing! We loved meeting students and families from the East Coast and learning about life in the US.

The Zebra: Was it your first time?

For about 50% of the staff and students, it was our first time here.

The Zebra: Who organized the trip and playing arrangements?

Our trip was organized through NPIRE, a company that runs basketball tours, plus other themed tours overseas. This company were the ones that booked the games against the US schools. We had the chance to have input into the itinerary, which allowed us to see the sites that we thought the students would enjoy best.

The Zebra: How popular is basketball in Australia?

Basketball is the probably second largest sport in Australia, second to AFL (Australian Rule’s Football). There has definitely been a boom in the last 5 years due to the success of some Australian players over here in the NBA.

The Zebra: How did your students enjoy the trip?

We believe (hope) that they had the trip of a lifetime! I think they realized how lucky they were to see what they did and have the chance to play basketball in America. We’ve only been home 24 hours, but we’ve already had a lot of positive feedback from parents.

The Zebra: How did you prepare for playing abroad?

High School sport is secondary to club sport in Australia, so as a group, this team was only able to train once a week, for about 45 minutes to an hour before school which made things pretty difficult! The students also found some of the rule changes hard to cope with. As an example, the students were used to playing with a 24 second shot clock – so learning to defend for longer and play with much more patience was a challenge.

The Zebra: Did you know anything about T.C. Williams prior to the game?

We knew that Remember the Titans was based off the school! And we knew that they were a very good basketball school – which certainly lived up to the expectations.

The Zebra: What was it like playing at T.C. Williams?

We were absolutely blown away with the size of your school, the facilities, and the athleticism of your students.

The Zebra: What did you get out of the experience?

To play against students potentially going to Division 1 colleges was such a learning experience, which gave the students a chance to rise to a challenge. Our students probably now have a better understanding of where they sit ability wise compared to US students.

The Zebra: What was it like staying with some of the families in Alexandria?

We got really good feedback from the students with their homestays. They all said that they had delicious food and that they loved the chance to spend the night talking to these families.

What were the strangest things about American culture?

School pride- strange in a positive way, the number of fans that watch high school games, Crocs and socks, multi-story schools and eating lunch in the cafeteria.

What was your favorite thing about playing in the States?

The energy and support of the school behind the students when playing. We can only dream of having large crowds, hosts, commentary, cheerleaders or sponsorship!

The final score had T.C. Williams beating Doncaster 79-31, but the disparity in score doesn’t accurately reflect the level of competition. Doncaster was a tough opponent with similarly skilled players. The Doncaster players were well coached and displayed impressive effort even when the game was clearly in T.C.’s hands. Ultimately, it was the Titan’s defensive pressure under coach Prue that won the day.

Even with the loss at T.C. Williams, Doncaster went home to Melbourne boasting a 3-3 record against U.S. based high school teams, and more importantly they had the trip of a lifetime. 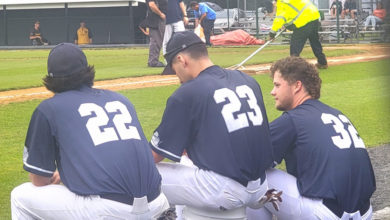 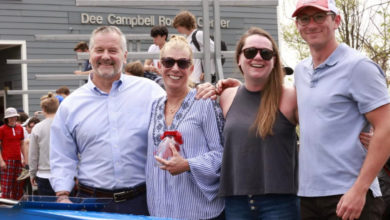 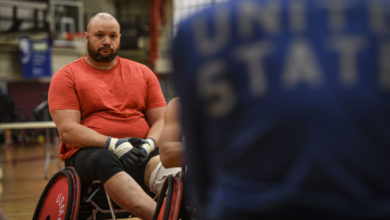