ALEXANDRIA, VA – Up until the Fall of 2014, Robert Swain was known to most Alexandrians as the banjo-playing singer/founder of King Street Bluegrass. But that all changed when he suffered a near-fatal stroke escaping within inches of his life.

Legend says it all started in an alley next to an ice cream shop.

Swain strummed banjo and sang lead in a four-piece band that debuted in 2008 playing on the bricks between The Creamery and Mia’s Italian Kitchen at 110 King Street in Alexandria.

By 2014, they had been regularly invited to play at prestigious venues such as the Kingman Island Bluegrass Festival in Anacostia, the Washington Folk Festival and one of their favorite haunts, Alexandira’s Tiffany Tavern on King Street, sadly gone now but at the time, a serious regional mecca for bluegrass fans.

But things took a serious dive during the weekend after Thanksgiving of 2014. The band  had just returned from playing their biggest gig at the time—The Roscommon Circle Festival in Ireland—when Swain took his dog out for a walk.

On the way back he noticed he couldn’t talk.

The pair suspected he might be having a stroke but Lisi says, “the hospital incorrectly treated him for blood pressure rather than an ischemic stroke because he was still speaking and carrying on a conversation.”

Luckily, Swain’s hospital roomie was business owner and former EMT Lee Blount, who was in for some routine tests. The two had started chatting and befriended one another. “When he looked over and found Robert unconscious, Blount pushed the emergency button,” says Lisi.

Lee, a singer himself, spent years afterward searching for Swain, concerned about his recovery, and they’re good friends now.

Robert’s son Matt, a Navy physician at the time, helped coordinate a hospital switch from Mount Vernon to Inova Alexandria Hospital where Swain underwent an emergency five-hour brain surgery to remove multiple clots in his cerebellum and treat him for carotid artery disease.

“His surgeon initially said he would not survive,” says Lisi, but fortune favored Swain with nearly totally-restored circulation to his brain.

Banding Together for Real

The experience initially left Robert, then 65, without speech or feeling in his right hand.

But his band mates gave him strength. Eight of his musical cronies were in the waiting room during the five-hour procedure and many would be with him during his ten-day stay in the ICU as well.

They would regularly show up at the hospital to cheer on his recovery. More importantly, they decided not to quit on him as a band member either, holding discussions with him about the future of the band and putting the future in his hands.

As news spread, fellow musicians and friends in Jefferson Manor, Swain’s neighborhood in the Huntington area of Alexandria, pitched in immediately after he returned home.

Donna Fletcher, a member of the local blues community, bought him a special bed for his home recovery and devoted band mate Roger Hart (the band’s harmonica player) and Donnie Faulkner (the band’s current lead singer) helped in assembling it. Other musician friends helped with household chores like mowing the lawn and one bought him an iPad so he could use speech apps.

Within four months, Robert had returned to his job as an attorney for the U.S. Department of Labor but singing would take a longer period of time.

As soon as they could, King Street Bluegrass included him on stage at a chili cook-off booking in Springfield. By that time, his skills as a singer and banjo player left enough of a hole in the band that King Street Bluegrass needed to bring in two members to replace his talent: Donnie Faulkner on vocals and Rob Waller on guitar.

Despite being unable to play a plucked instrument, Swain discovered he could bellow out the baritone parts of the performances.

“It was great to be able to sing again with my band, I needed to have King Street Bluegrass to come back to, and I am so glad that they did not break up after my stroke,” said Swain.

In the interim, he played drums in a surf-rock ensemble called the Surf Jaguars which was a side project for some of King Street Bluegrass’s members.

The album includes songs by the current five-member line-up (Swain, Lisi, Hart, Waller and Faulkner) with guest artists Keith Arneson (of the United States Navy Band) on banjo and John “Cap’n John” Ace (a licensed sailboat Captain who lives on the Potomac) on fiddle for select tracks.

Ace will miss the concert as he will be gigging down in Florida, but Stacey Sinclair, the band’s permanent fiddler before Ace, will be reuniting with King Street Bluegrass as her band, Split String Soup, is the opening act. Bluegrass country DJ Chris Teskey will be the MC for the night.

Known for their philanthropy over the years, King Street Bluegrass has raised over $200,000 through unpaid jam sessions since 2010. Now they are directing attention to awareness for stroke prevention.

Swain, who now speaks with a lisp, speaks up about spotting symptoms of the disease and has been vocal in crediting the Stroke Comeback Center in Vienna, Virginia, which has given him steady assistance for years at affordable rates.

At the concert, Stroke Comeback Center President Darlene Williamson and Dr. Thomas Smirniotopoulos (an ICU doctor and songwriter) will both be featured speakers.

Tickets for the album release party are still available and can be purchased here. 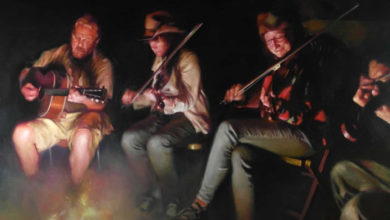