Alexandria, VA – Jennifer Bryant had another sleepless night. As president of the Mt. Vernon High School Crew Boosters, she was used to constant fundraising to keep the crew program afloat. But when the pandemic hit, in-person fundraising was canceled, effectively cutting the program to its core. The team’s dwindling leftover funds were not enough to cover the costs of students who couldn’t afford the dues. Families who usually pitch in to cover some costs had also been hit. In many instances, they were now living on one income rather than two, or even none at all.

It was time to get the boats in the water for the spring 2021 season. In general, one season of competing as a crew team costs about $50,000. Student dues are $1,000, and while some students can afford that, many simply cannot. They fundraise to cover the costs for everyone.

“These students are motivated. They fund the team on their own every year. Washing cars, hosting bake sales, roaming the neighborhoods for donations on Tag Day, doing anything they can do to earn money,” she explained. Unfortunately, the pandemic took away those opportunities.

Once they got the go-ahead for the spring season, Bryant took a close look at her ledger and saw that only two students had paid the dues. After a team meeting, they learned that ten students would be unable to pay dues at all. Her worst nightmare was coming true. She lay in bed, tossing and turning, wondering how on earth she could save the crew program.

“Rowing is a beautiful sport,” Bryant explained. “You have to work closely and in complete rhythm with your boatmates. It’s a true team sport.”

It’s also a program worth saving. Crew is a scholarship-heavy sport. Colleges are eager for talented, experienced students to row on their crew teams, especially females. For any student, it’s a fantastic opportunity to get higher education on a scholarship. Bryant knew the value of the crew team for these kids.

In early April, after another sleepless night, Bryant received an email from Ron Fitzsimmons, vice president of Alice’s Kids, an Alexandria nonprofit dedicated to funding small-scale, much-needed items for children. Bryant was not familiar with Alice’s Kids, but Fitzsimmons’s message was clear: “We hear the crew team is in trouble. How can we help?”

It turned out that he had seen a post from a crew team parent on the online social networking site Next Door that the team needed help. “This was right in our backyard,” Fitzsimmons said. “We were eager to help, but we had to ensure the money would be spent on kids in need, as we always do.” He asked Bryant to break down the costs.

She replied with a detailed email on the ten students who could not afford to pay the dues: A senior whose mom was laid off and dad is on partial disability. A junior whose dad lost his job, then his older sister lost hers and had to move back home. A sophomore who wants to be the first in her family to go to college and hopes for a scholarship; both her parents lost their jobs in the pandemic. A freshman rower whose mother is physically disabled; they have been forced to move in with her aunt, who supports them. That’s just a few of the heart-wrenching stories.

Fitzsimmons said, “We don’t normally do group requests like this, but really, it was a no-brainer.” There were many compelling reasons for Alice’s Kids to fulfill this request, including that this was for his own kids’ alma mater. He wanted to help get those kids in a boat, and he said to Bryant, “Give me a number.”

Bryant paused and said, “Well, $5,000 would help a lot.” And Fitzsimmons said, “Ok, we’ll do that.” He waited a minute as there was no reply from Bryant. Another moment passed. He said, “Are you there?” She was there, just stunned. “I mean, it was nuts! He was an angel who appeared out of nowhere and saved our spring season,” said Bryant. “Honestly, I am still amazed about this.”

The entire team is grateful to Fitzsimmons and Alice’s Kids. They understand the lifeline they just received. “I didn’t know about Alice’s Kids before, but I sure as heck know them now,” laughed Bryant. Her daughter, a crew team member, also thanks Alice’s Kids for the generous donation, and she wants to pay it forward. “We should do something to thank them, Mom.” Stay tuned for more good news in this developing story.

For MVHS Crew, the spring season is saved, but the need goes on for this earnest team. Their boat racks are dilapidated, in dire need of replacement — repair is no longer an option. The highest priority is the safety of all the kids, so the boosters created a GoFundMe program that will finance new racks. If you can donate to help them reach their goal, please visit their GoFundMe page at www.gofundme.com/f/fundraising-for-crew-expenses?utm_medium=copy_link&utm_source=customer&utm_campaign=p_lico+share-sheet.

Dani Sauter Is the Blonde in the District 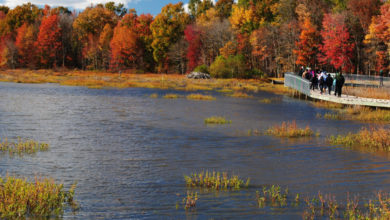