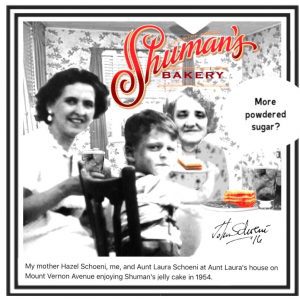 Who could forget in the 1950s the smell and wonderment of Shuman’s Bakery on the 400 block of King Street? It has become a legend in our minds at least, since the building is gone, yet its fantastic jelly cake famous since 1876 is available now online (www.shumansbakery.com). And aren’t we glad that although we can’t walk into Shuman’s and take a booth by the wall across from the baked goods’ case, we can still taste and treasure their heavenly jelly cake.

Oh the memories of storefront Shuman’s that began when Louis Shuman came to town and started his bakery. Many an afternoon when my mother and I walked up to Mount Vernon Avenue and visited with Aunt Laura and her son, my Uncle Dick Schoeni – he was really my cousin but since he was so much older, I called him uncle. Aunt Laura would always bring out a beautiful tray with Coca-Cola and coffee and several pieces of Shuman’s jelly cake dusted with their traditional powdered sugar. It was “old-school” days and not only did women wear hats, veils and gloves to church and children not sass their parents with backtalk but family or friends offered fancy treats when people came to call. Every time we visited Shuman’s the ladies working there would visit each table and offer children cookies freshly baked, from a basket. It was quite the extra touch for a classy old-fashioned bakery. There were no bakeries in grocery stores as part of their food offerings in those days. They were freestanding establishments of delicious homemade pastries and baked goods. Nothing processed from a factory.

Sure Shuman’s has been a tradition for Alexandrians way before my time but it’s baked goods never changed in quality or taste. They even say Princess Elizabeth ordered a cake for Buckingham Palace  before she became queen. And they always remind us that Willard Scott said that if he were on a diet, if he couldn’t have Shuman’s jelly cake, he didn’t deserve to live.

No family gathering would have ever been the same in Alexandria without Shuman’s. No self-respecting Alexandrian would have even thought of such a thing. They would have been horrified to have even considered it. In the early 1950s my older brother Bill and my mother used to frequent the bakery for lunch and dessert. And sometimes just for a jelly cake treat. When we went “in town” as they used to call it, on the AB&W bus in the early 1950s, we always got one of the tall wooden booths at Shuman’s, with the wooden fans and the hardwood floors. The waitresses were all gussied up and took our orders, usually Cokes and a tuna sandwich followed by a delicious slab of Shuman’s jelly cake dusted by the sifter with powdered sugar. If the sales lady had a clean apron without powdered sugar on her hands we would have thought she didn’t even work there and was an imposter.

There was no Christmas without Shuman’s jelly cake, Shuman’s pound cake, a slice of our own Grandmother Beach’s fruit cake made with raisins and currants, a piece of Russell Stover candy and some mixed nuts – especially cashews. Every night between Christmas and New Year’s it was a favorite repast for our family. Every one of us had a Christmas plate fixed up just like that.

When so-called urban renewal (urban destruction) robbed us of our historic buildings on the 400 and 500 block of King Street, Shuman’s moved to South Washington Street near Demaine’s Funeral Home.

Now as we are getting along in years and Shuman’s has moved to the Internet we always order jelly cakes every Christmas to reminisce by smell, taste and enjoyment those days when Shuman’s Bakery was a storefront and a Christmas staple.

You may talk nostalgically about the Waffle Shop at King and Washington Streets and the one in Arlandria and their shoestring french fries, or the Mighty Moe from the Hot Shoppe, the Sirloiner from Topps, westerns and popcorn at the Palm Theater on Mount Vernon Avenue, hamburgers at the Little Tavern on North Washington Street, barbecue sandwiches at the Dixie Pig on Powhatan Street, skating at the Alexandria roller rink or sledding at the Masonic Temple, and a host of other memories when taking your walks down Memory Lane, but at the top of my list is Shuman’s Bakery and their powdered sugar-dusted jelly cake.

Rumor has it that my Great Aunt Mary who lived on South Lee Street from 1880 to 1961, was sweet on Aubrey Shuman back in the day, say around 1896. As all family stories go, we can’t prove it because we never had the nerve to ask her. Sadly, she is gone but Shuman’s jelly cake and the memories are not.

Who’d You Vote For, Er… Against?