Legendary CBS New correspondent Mike Wallace is baaAAAaack in the new documentary directed by Avi Belkin. Mike Wallace is Here follows the rise and treading water of the original 60 Minute’s man across five decades of broadcasting, acting, and telejournalism. The compelling hour-and-a-half film goes by like it’s a 60 Minutes expose.

The myriad cameo list is a who’s who A-List of reclusive celebrity and infamy – Barbra Streisand, the Ayatollah Khomeini, Johnny (Carson) to Bette (Davis) along with more notable giants of the press and media, Ben Bradlee, Larry King, Bill O’Reilly, Oprah, and Barbara Walters. We also see the legends of broadcast who contributed to making the news into Sunday-night must-see TV: Bradley, Couric, Cronkite, Gumbel, Kuralt, Koppel, Mudd, Rather, Reasoner, Safer, Sawyer, Sevareid (who had a home on Pegram Street in the Alexandria’s West End), Schieffer, Stahl – the list goes on and on.

60 Minutes premiered on CBS September 24, 1968. It is credited as the brainchild of news producer Don Hewitt, who claims he stole the concept outright from Life Magazine. The program was intended to present investigative reporting in a personality-centered magazine/interview format. Now nearly ending the first year of its 60th decade, 51 seasons strong, the show spawned much competition in its half century on the air. Few of the spin-offs remain on air.

The catch phrase “Mike Wallace Is Here” became the hallmark of macho-aggressive reporting giving rise to a new style of journalism – brash, unrelenting, and ruthlessly incisive. O’Reilly, much to Wallace’s dismay, duly credits him with branding shock-jock programming and tabloid television. Under indictment? Mike Wallace was there. Throwing a coup? Here’s Mike! Undermining the Constitution? Mike is gonna want to know why?!? Whistle blowing? Wait until Mike Wallace is here!!!

The film turns the table to Wallace himself, taking an exposé tack exposing the softer side of Mike Wallace. The editing by Billy McMillin is prodigious, not only in its focused examination of the consummate tough-guy reporter’s  vulnerabilities – from putatively career-capsizing acne as a youth (a face made for radio, as he jokes) and his mental-health challenges to extrapolating the tragic loss of his younger son Peter in a hiking accident in Greece, which resulted in a re-evaluation of life’s priorities. Family, friends, and philanthropy finally upstaged fame, fortune, and feisty ferocity.

McMillin and a crew of very able assistant editors cut the film down from nine-hours to the 90-minute release. The film is comprised entirely of aired interviews and old footage. “It was complicated to edit. It’s an all-archive movie, but it feels fresh. It doesn’t feel like a movie made from just clips of the last 50 years.”

In a media climate where news is “fake”, when “reality” TV is scrupulously scripted and rehearsed, and “media” is a four-letter word, journalistic integrity would appear to be sidelined. Mike Wallace was a man of focus, determination, and consummate professionalism. “Mike Wallace Is Here” reminds us that First Amendment protections are the foundation of our Democracy. Uncensored we stand. Silenced we fall.

Somehow 60 Minutes endures despite Wallace’s absence but we certainly could use more truth-seeking, unwavering journalists like him – now more than ever. Paraphrasing the words of Tim Russert quoting Daniel Patrick Moynihan, we are entitled to our own opinions but not our own facts. And that’s the way it was.

Mike Wallace is Here is in limited release at Landmark and Angelica Theaters in New York and Los Angeles. Mike Wallace is heading to DC soon. You better watch out. 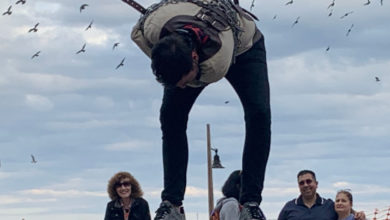