ALEXANDRIA, VA – The celebration of the 19th Amendment continues at Alexandria Library‘s Barrett Branch. On display through September 23 is an exhibit called “Rightfully Hers,” on loan from the National Archives. The exhibit contains messages that explore the history of women’s voting rights and their meaning in the present.

“The ratification of the 19th Amendment was a landmark moment in American history that dramatically changed the electorate,” said exhibit co-curator Jennifer N. Johnson, “and although it enshrined in the U.S. Constitution fuller citizenship for women, many remained unable to vote.”

According to NPR, even after the ratification of the amendment, barriers remained for Black women because of their race

There is limited capacity in the library. Those who wish to view the exhibit are asked to keep social distancing in mind. To learn more about Kate Waller Barrett and her work in the suffrage movement, make an appointment to visit the Local History/Special Collections area.

“Rightfully Hers” is organized by the National Archives and Records Administration. In celebration of the 100th anniversary of the 19th Amendment, the National Archives has launched a nationwide initiative and major exhibition that explores the generations-long fight for universal woman suffrage. The exhibition is presented in part by the Women’s Suffrage Centennial Commission and the National Archives Foundation through the generous support of Unilever, Pivotal Ventures, Carl M. Freeman Foundation in honor of Virginia Allen Freeman, AARP, and Denise Gwyn Ferguson. 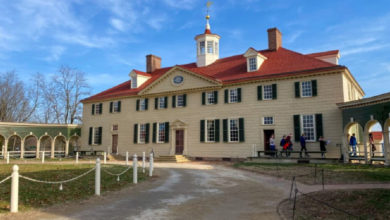