Alexandria, VA – First Thursdays are back in Alexandria. On a recent one, May 6, the Dogs of Del Ray mural at Pat Miller Square was dedicated by the Animal Welfare League of Alexandria (AWLA). The Square is at 2318 Mount Vernon Avenue and salutes Ms. Miller’s service to the Del Ray community.

“The story behind the mural is based on a mural in Dunedin, Florida,” explains Karen Johnson, co-founder of PawsGo, an online community for women and their dogs. “Maurine Schweers, who does communication for the DRBA (Del Ray Business Association in Alexandria), saw a Facebook post of the mural in Florida, and she emailed Pat Miller and me and said, ‘This would be something fun to do in Del Ray. How can we do it?’ So Pat Miller, who knows everybody, contacted Nicole Jones, the dog-loving owner of the Del Ray eatery Stomping Ground and Ray Mahmood, who owns the building. They thought it was a great idea.

Of the numerous artists Pat and Karen interviewed for the project, Patrick Kirwin stood out as the perfect fit for this project.

Since March, Patrick has been painting portraits of the dogs of Del Ray on the north wall of Stomping Ground at 2309 Mount Vernon Avenue. You might have noticed his subtle jokes painted throughout the mural—can you spot Pink Floyd?—and a painted version of the artist’s scaffolding as he neared the top of the wall. The mural of dozens of dogs now adorns the entire wall of Stomping Ground, overlooking Pat Miller square.

On this First Thursday in May, several local rescues and pet establishments, including Operation Paws for Homes, Lost Dog and Cat Rescue, the AWLA, Nature’s Nibbles, and Wholistic Hound Academy, gathered in Del Ray as Patrick Kirwin and Stella Hanly of the AWLA cut the ribbon dedicating the mural.

Along with their mural dedication, the AWLA received a check from the Del Ray Business Association. The DRBA purchased a pet portrait square on the mural and raffled it off.

“I reached out to ten of my friends to get it started,” said Karen Johnson, “and those ten people kept telling people. Within a week, we had 100 dogs. It was like dominoes.”

Each raffle entry was $10, and the raffle winner was randomly selected. Congrats to dog Pelu! With every other portrait square purchased, dog owners were able to donate to the AWLA additionally. The raffle entries, coupled with the portrait donations, totaled $4,400.

“We are so grateful to all the people who donated and who are bringing supplies to help animals in need across the community,” said Gina Hardter, Director of Marketing and Communications at AWLA. “Having the Dogs of Del Ray mural is just another way to show how much Del Ray and all Alexandria loves animals.”

The AWLA also received a portion of the proceeds from each Nature’s Nibbles bath given on May 6. This money will go towards the Pet Pantry at the Animal Welfare League of Alexandria. May’s First Thursday in May was full of animals, art, and giving hearts.

A Trip to the Shenandoah Valley (on Two Legs and Four)

Babies and Dogs: What Could Possibly Go Wrong? 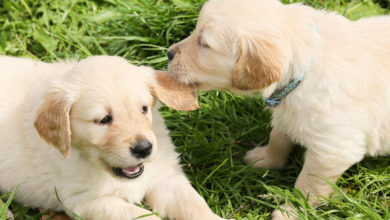 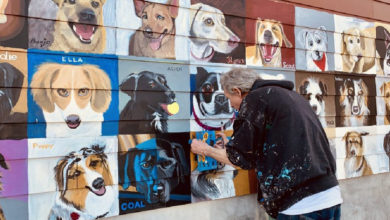 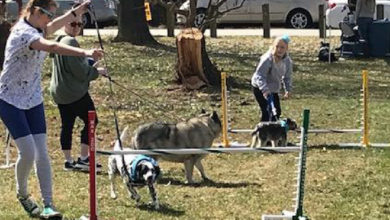 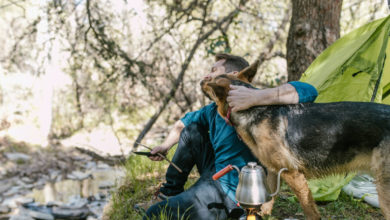