Mark Bucher, founder of Feed the Fridge and co-owner of Medium Rare Restaurants, started the first version of this effort in 2006 when he began providing free Thanksgiving meals to those who lacked access to food ingredients or the ability to cook them. So he opened one of his Medium Rare restaurants to cater to those needs.

“It started in 2006 when I received a thank-you note from a family living in a shelter that received ingredients to make their meal but had no resources. Every year since then, I’ve opened up one of the restaurants. Two years ago, it got so big that we had to move to Nationals stadium to accommodate the crowds. That is how big the hunger situation is,” says Bucher.

In addition to their holiday meal efforts, Feed the Fridge combats hunger exactly the way it sounds: With over 20 public fridges in the D.C. Metro area, Bucher teams with local restaurants to keep the fridges filled with prepped and ready-to-go meals year-round.

This year, Chef Charlie Palmer of Charlie Palmer’s Steakhouse and his general manager Mike Irving got involved. In 2020, the Steakhouse had to close at the onset of the pandemic temporarily. “I had no idea what we were up against,” recalls Irving, “but I knew this: the food we had in store was perishable, so Chef Palmer said to find a place to donate it. He wanted to make sure this food was put back into the community.”

Irving had seen Feed the Fridge all over social media; he knew their platform aligned with what Palmer wanted to do to benefit the community. So in March 2020, Irving called Bucher, and a relationship with Feed the Fridge began.

Fast forward to December 2021. Irving reached out to Bucher again to help with their holiday meal effort. “With one big push for the holidays, we put together roughly 350 meals,” says Irving. “Then Mark’s team picked them up. We were very happy about it.”

Traditional holiday meals of turkey and dressing, with potatoes and greens, were delivered to seniors who were grateful for some warm food and warmer company. “We always get the same reaction,” says Bucher, who details expressions of surprise and gratitude. “The fact that someone was thinking of them, knowing someone cared, is the amazing part.”

This warmed Chef Palmer as well, who has now committed to the Feed the Fridge campaign by filling local fridges with at least 100 meals. The meals vary daily, per fridge and per restaurant that fills them. One of Chef Palmer’s featured meals includes meatloaf, mashed potatoes, and broccoli with mushroom gravy.

With plans for annual participation in holiday meal service, Irving and Palmer hope they will help to make a difference in their community. “We’ve been a part of the donations here and there, but nothing as significant as filling the fridge. We can make this as big and fabulous as we want it to be,” says Irving.

In addition to their local fridges and Christmas meal, Feed the Fridge does other holiday meal deliveries throughout the year, including Mother’s Day, Easter, and Thanksgiving. This calendar has made a significant impact in the D.C. Metro area already, but Bucher (and Palmer with him) wants to do more in more places.

With goals to expand Feed the Fridge to every major metropolitan area in the country, Bucher has some work ahead, but with partners as eager and invested as Palmer and Irving, it is sure to be a success.

For more information on Feed the Fridge and how you can get involved, visit feedthefridge.org. 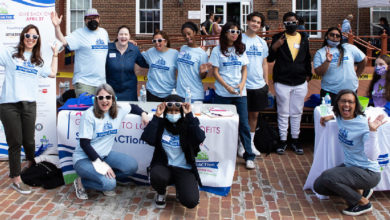 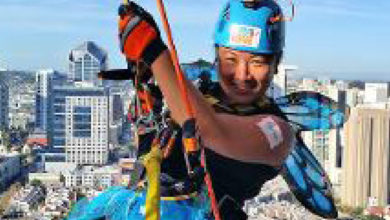 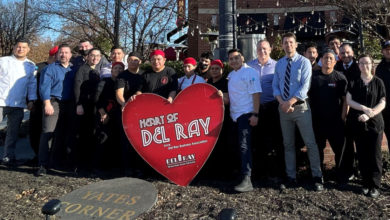