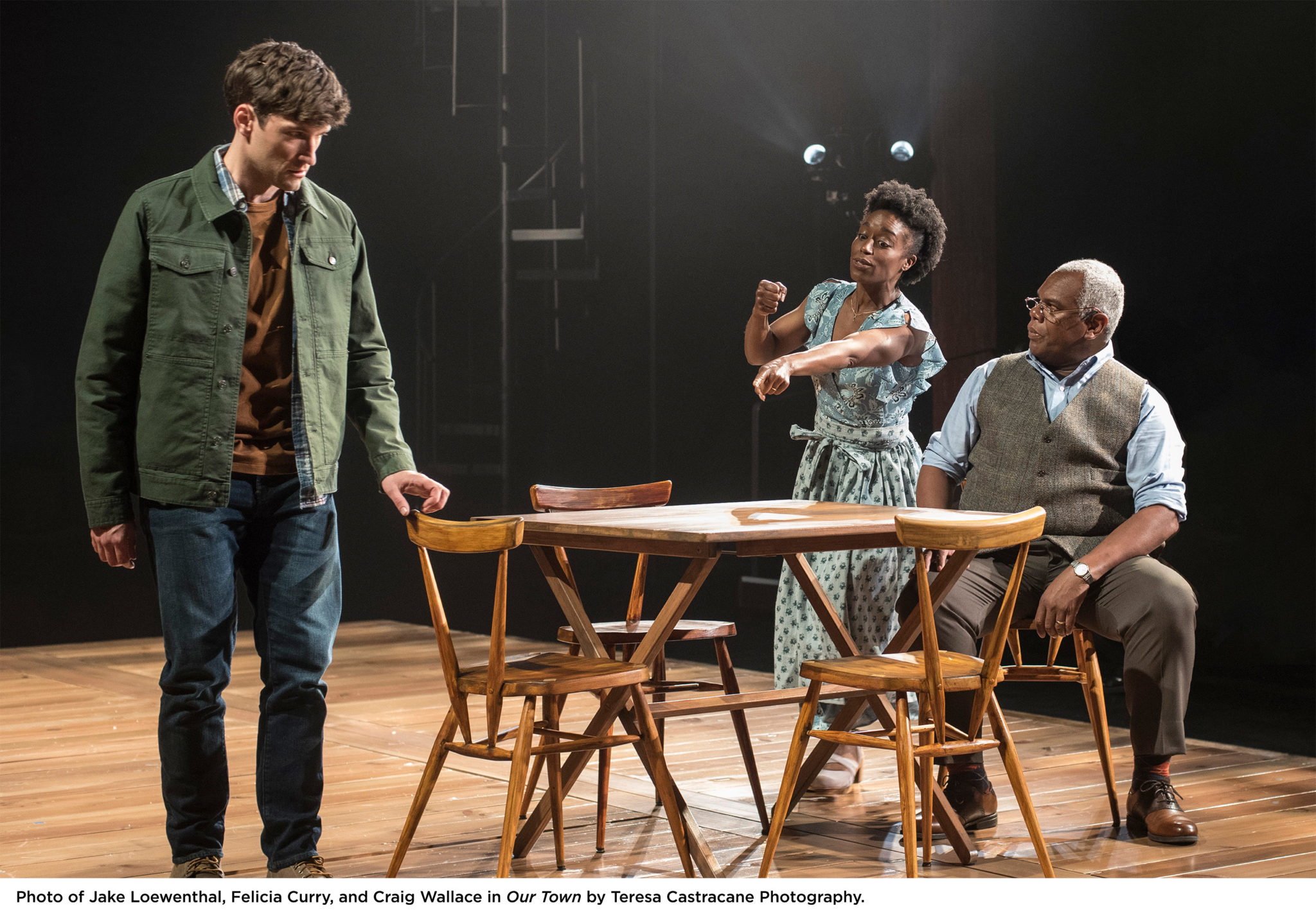 WASHINGTON, D.C. – It’s been a while since I’ve seen a production of Thornton Wilder’s American classic, Our Town. Chances are it was a high school production.  Maybe you could say the same. I’ll even venture to guess that either you’ve been in this play or seen someone you know perform it.

Written in 1938 and set at the turn of the 20th century in a small town in New Hampshire, Wilder draws on his New England roots to embrace the ordinariness of diurnal family life in Grover’s Corners. The zeitgeist captures the essence of the American family unit reminiscent of the homogenized 1950’s – think Norman Rockwell. Kids go to school, the milkman delivers, newspapers arrive by a boy on his bike and the whole family eats dinner together every night. To present this drama, Director Alan Paul employs a local and very diverse cast, a departure from casting big name, out-of-town actors. Lately, there’s been a demand for theaters to use locals in the cast and crew, and some directors have risen to the challenge. As Paul said on opening night, “Making theater now is kind of like a radical act.” And, I’d suggest, a gamble. 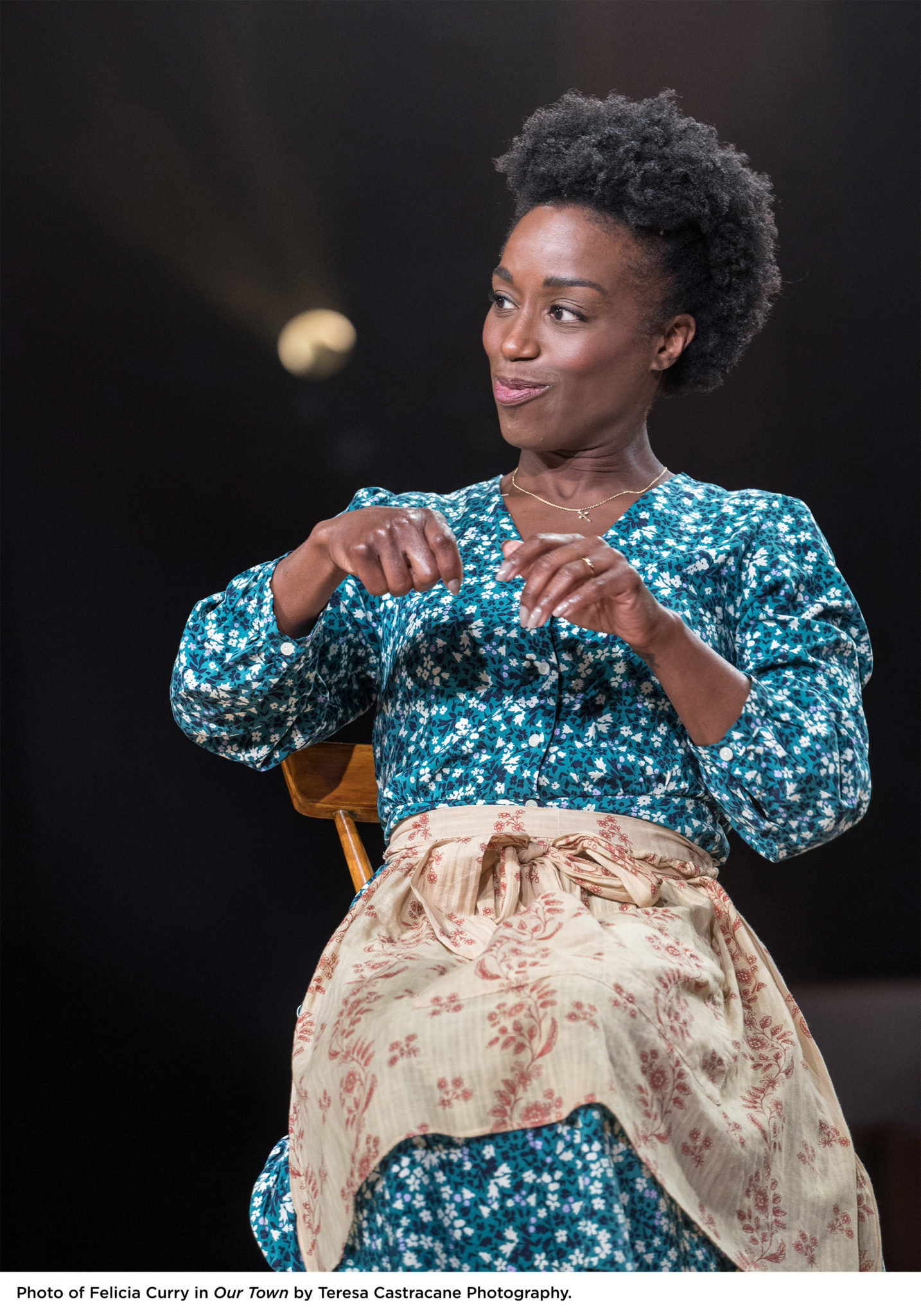 Local actors Holly Twyford, Natascia Diaz, Felicia Curry, Jake Loewenthal, Lawrence Redmund, Craig Wallace, Sarah C. Marshall and Erin Posner are a known commodity to those of us who have seen them in a variety of roles at many local theaters. Collectively, they can boast numerous Helen Hayes Awards and their performances and characters are as finely tuned here as in any of their previous work. That said, I’m not at all sure audiences are ready to embrace an old chestnut like Our Town which leans heavily toward White nostalgia for suburban life in the early Edwardian era. Is this what post-COVID audiences are looking for from dramatic productions? It seems to me audiences are looking to explore more complex themes, chuckle over satire and/or tap into the struggles of different cultures with eyes wide open. We expect to be immersed in something deeper in a play. What is universal in Our Town is the message of hopes denied and dreams deferred, but it’s quite a stretch to take it from small-town, White America and expect it to apply to all other cultures. 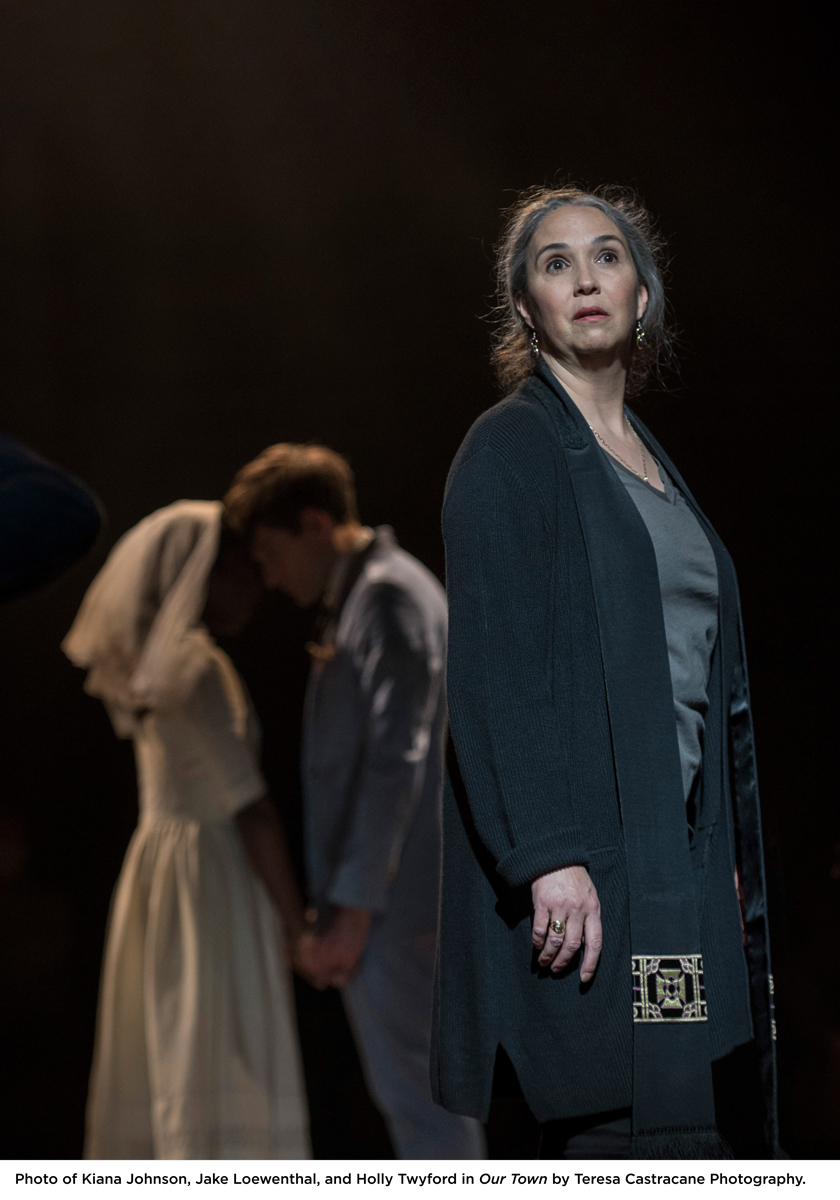 Scenic Designer Wilson Chin presents us with a Quaker-simple, pared down set in the round and dots it with wooden chairs and tables to laser-focus on the text and the families and townsfolk interactions. As stripped down as it is, I still yearned to see the moon to drop down from the rafters during Emily and George’s teen love scene. It’s appeared in every production I’ve ever seen, and I missed its dramatic metaphor for the wider world we live in and the tender emotions of young love in bloom. 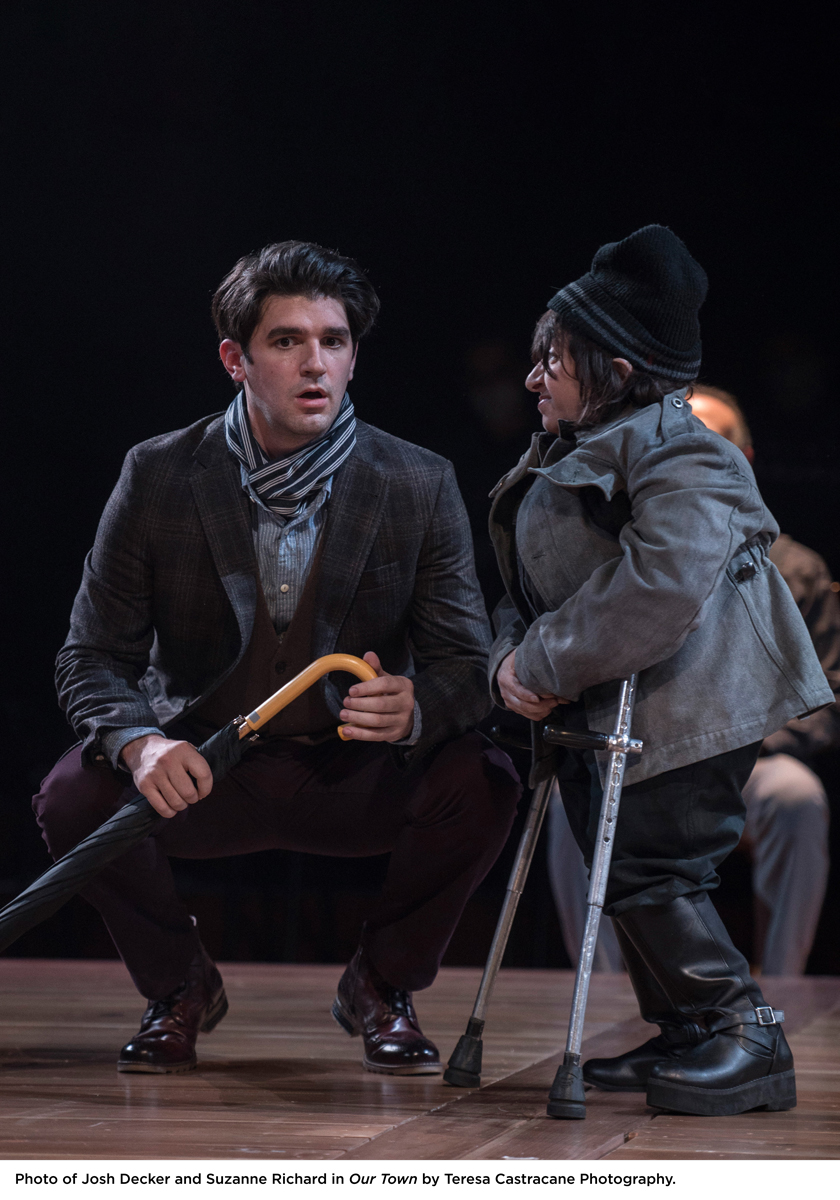 Only in the third act of this lengthy drama, when ghosts of her past haunt Emily during her voyage between death and the afterlife, do we glimpse the crux of the play. They advise her not to review her life nor attempt to make contact with any of the others – living or dead. They advise Emily to just give up – to cede to the inevitable. It is at this point that Paul dispenses with the miming of props and surprises us with a rising glass box featuring Mrs. Webb preparing pancakes and surrounded by props to wow us.

If you love these actors, as I do, you will want to see this production.  But, then again, you’ve probably seen it a hundred times.