WASHINGTON, D.C. – As you enter the Eisenhower Theater to take your seats for the Blue Man Group the red velvet curtains have already been pulled back to reveal the set. A massive five-story scaffolding chock-a-block with a myriad of lights and computer technology fills the stage. Waiting for the show to begin, we played a game of Let’s See If We Can Identify These Throwback Screens. Together we spied the winged blades of a LEO-SAT (low earth orbiting satellite), an Atari ping pong screen, an MS-DOS operating system – busy coding, a sound oscilloscope, asteroids, search engines, a geometric screen saver and a colorful goldfish screensaver. Wires and dials and switches are tucked into every nook and cranny. The single-page program reads, “The People here are mailing codes to space. They are receiving letters from space, in the form of codes. The codes are being delivered all around us, on paths, making an invisible architecture.” Hmmm… We remind ourselves that over 35 million people around the world love the Blue Man experience.

When the three blue men plus a two-piece band emerge on stage, we thought we were prepared. The drummer had over a dozen clear plexiglass drums in his kit and the guitarist occasionally removed his guitar to join him on a smaller kit. What we didn’t predict was how highly orchestrated the lighting and sound effects would be and that the blue men would play their own array of cobbled-together instrumentation and how silly and clever their antics – absurdity coupled with unrestrained creativity. Wow!

The level of electronika, phosphorescence, lights and percussion is mind-blowing. It’s a paradise for techies and those of us who are in total wonder at the wizardry of it all. Are they space aliens or computer nerds left alone to play in a giant warehouse filled with stuff? I couldn’t help but wonder. Whatever your conclusion the show is a non-stop sensory explosion of gizmos, gadgets and goofy gags. Their innocent antics befuddle the blue men themselves while keeping the audience in both wonder and hysterics. Rubber chickens cross paths with virtual reality headsets and one wild scene has a man tossing dozens of marshmallows into another’s mouth from the opposite side of the stage. Yes, he catches every last one and mushes them into his mouth!

Dressed in camouflage suits, the creatures step off the stage and into the audience half a dozen times to bring a member up to the stage to engage them in some nutty skit. In one of these, they woo two women with gifts and a ring, engineer a mock wedding between them, handcuff them, lose the key, then politely ask them to play Twister. All in pantomime. The women found it as hilarious as the rest of us.

As a frequent theatergoer, I particularly loved their response from the stage when a couple arrived after the show had begun. With mics turned up, they trained a spotlight on the couple as they made their way down the aisle singing this little ditty repeatedly, “You’re late! You’re late!”. You’ll be thrilled to learn that the audience roared and applauded until the beleaguered duo found their seats. The Takeaway: Don’t ever be late to a Blue Man Group show!

TRENDING: “Six the Musical” at National Theatre is a Must-See

Must See Theatre: “SIX: The Musical” is Fun, Crazy and Amazing Show at National Theatre 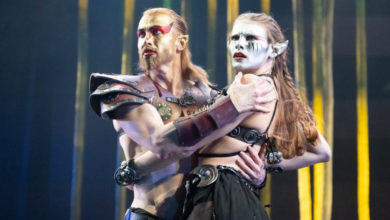