Alexandria, VA – Two years ago, our planet received a diagnosis that would change its people forever: COVID-19. A few months prior, one of those people, Garret Workman, received his own life-changing diagnosis: Stage 4 Kidney Disease.

In September 2019, Workman was living in DC with Jess, his then-fiancée. He seemed healthy but had recently developed excruciating migraines that were so debilitating they made him sick. Garret knew something wasn’t right, but what could it be? He was otherwise asymptomatic and led a healthy and active lifestyle.

“I made the mistake, like many young men do, of not going to the doctor as often as I should,” he says. “I finally went to urgent care for having migraines to the point of vomiting. They found my blood pressure was high, and the creatinine in my urine was really high.”

The urgent care physician ordered Workman to the hospital emergency room for a kidney biopsy. They discovered he had 25% of the normal level of kidney function. Workman was in stage 4 of kidney disease.

“That was a scary thing to learn,” he says. “It is the kind of thing you don’t notice on a day-to-day basis, but rather a slow decline. Thankfully there are lots of ways people can get help and recover very quickly.” And Workman took advantage of as many of those ways as he could to begin his road to recovery.

The first step was connecting with a nephrologist. George Washington University Hospital Nephrologist Dr. Renu Regunathan-Shenk first met Garret in the fall of 2019. Together, doctor and patient learned that an immunodeficiency caused Garret’s type of kidney disease. His body was attacking his kidneys, causing high blood pressure, adrenal failure, blood and protein in the urine, swelling in the ankles, and migraines, to name some of the symptoms.

If caught in the earlier stages of active inflammation, some patients can be treated with immunosuppressing medication. However, Garret’s disease was already in stage 4, causing scar tissue to develop, disqualifying him as a candidate for the immune therapy. He went to Dr. Regunathan-Shenk to explore the options still left in his territory.

“We focused on treating his chronic disease and preserving kidney function,” explains Dr. Regunathan-Shenk. “We aimed to control his blood pressure, plan for a kidney transplant, and be proactive about everything.”

Because Dr. Regunathan-Shenk couldn’t know precisely how long Garrett had kidney disease, she did not know how quickly it would progress. They worked together to monitor his kidney function and symptoms and decided that they would not do a transplant unless absolutely necessary.

“That plan worked well for him,” says Dr. Regunathan-Shenk. “We managed his kidney disease with blood pressure medications, diet, and frequent follow-up.” But after roughly 18 months of monitoring and mitigating symptoms, Workman and his doctors determined that the time for surgery had come.

“In December 2020, his disease started to progress,” says Dr. Regunathan-Shenk. “We needed to get the ball rolling and, of course, to plan around the pandemic.”

As Garret Workman’s kidney disease was progressing, so was COVID-19. Thus, he and his doctors had to prepare for his transplant accordingly. This meant relying predominantly on telemedicine, minimizing trips to the hospital, and no use of deceased donor organs. (Medical knowledge of the effect of COVID-19 on internal organs and the viability of donatable organs has evolved since then). Dr. Joseph Melancon, Director of George Washington Transplant Institute at George Washington University Hospital, would perform the surgery.

Garret had already taken the first step to kidney transplant surgery: undergoing a full workup and ensuring that the patient is a stable and healthy candidate. The next step? Find a kidney.

“I wanted to save his life”

“Garrett told me about his diagnosis, that it was manageable with medication, but he would eventually need a transplant,” says Lepak. “I offered my kidney without a second thought. Of course, I had no idea if I would be a compatible donor, but I wanted to give him that potential. I never thought about why, it was just such an instinct. He’s my best friend, and he was facing such a difficult situation. A young, healthy guy with a new fiancée and his whole life ahead of him…what a raw deal! I wanted to save his life if I could, and I know he would’ve done the same for me.”

Others had also stepped forward, including most of Garrett’s immediate family, close friends, and now-wife, but Patrick’s offer just seemed right. It was a way for two lifelong best friends to always be close—as close as any two people can get—plus it was logical. Workman’s parents were growing older; his brother was active in the Air Force; his wife might one day become a mother. Patrick’s kidney was young and healthy and would remain uncompromised by life and lifestyle. 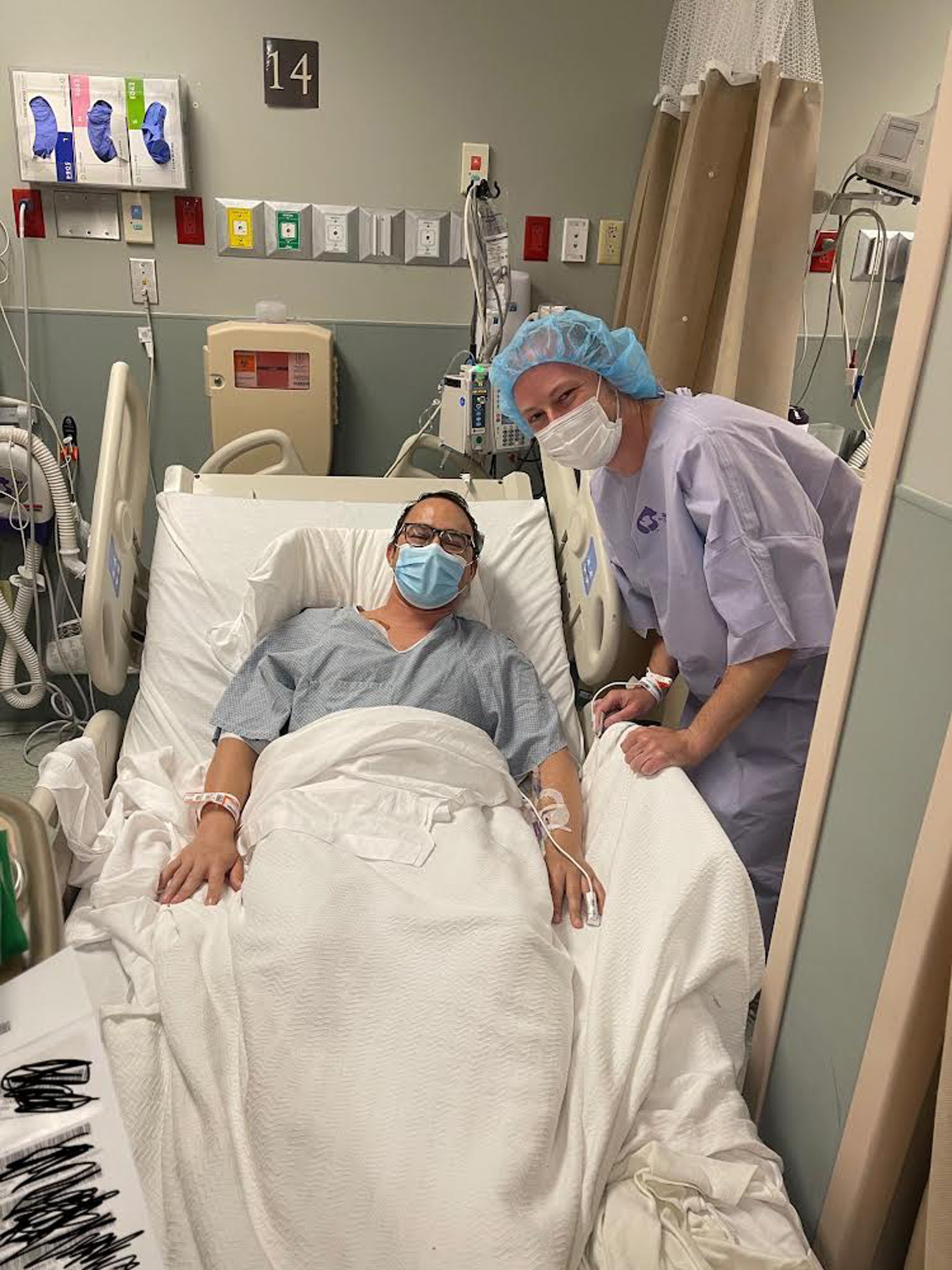 Dr. Melancon agreed that this story was a standout. “Patrick told me from the beginning this was his best friend, and he was adamant he wanted to be the donor.” So Garret and Patrick were prepped and ready for surgery. On June 8, 2021, they each went under the knife. Patrick went first.

“I had never been admitted to a hospital before the kidney surgery. Any nerves I had were the result of that more than anything else,” he says. “Would it hurt? What would anesthesia feel like? The transplant staff kept me informed and supported, but it was a new experience for me. I can’t say it was easy. I don’t think any surgery would be, but it wasn’t nearly as difficult as I anticipated.”

“…as smoothly as it could have.”

Garrett Workman had focused so much on just getting to that day that he had not slowed down enough to be nervous about invasive surgery. He does recall his feelings after the procedure.

“I felt a lot better. It took a couple of days to walk again, but honestly, relief was the overriding emotion. As soon as I woke up from surgery, my first action was to look across and see that Patrick was there and that both of us were doing well. It went as smoothly as it could have.”

Patrick felt much the same. “After surgery, my immediate thoughts were with Jess and Garrett. Recovery was uncomfortable but not painful, and I was up and walking around the next morning. No regrets. Absolutely worth a bit of discomfort to save a life.”

During recovery, Patrick and Garrett used each other as incentives to heal. Their rooms were down the hall from each other and they often took walks to check in on one another.

This June, Workman and Lepak celebrated the one-year anniversary of their surgeries. Since release from the hospital, they have led full and fulfilling lives. Garrett Workman got a party to celebrate his marriage and moved to Alexandria. Patrick Lepak spent time with his girlfriend in their Denver home, and he was recently on a scuba diving vacation.

The advice among the four people in this story, doctor and patient alike: Don’t Skip Your Annual Checkups! Get your lab work done, pay attention to all of your lab work, eat healthily, and exercise daily. You’ve heard this all before; don’t overthink it. Equally important as maintaining your annual checkups: maintaining a support system.

As a healthy, thriving kidney transplant patient, Workman leaves us with this last piece of advice, a dose of reality: “This can happen to anyone. You don’t have to be a certain age or race or health or sex. I have met so many people who have this in their life. It is not that rare a disease, but people don’t talk about it much. There doesn’t need to be any stigma around it because you can feel better very quickly. I feel better than I did for the last seven to ten years. I didn’t realize how sick I was.”

Garrett and Patrick reconnect with each other as often as they can. “To realize we are both in great condition is really nice,” says Workman, who is now back to long bike rides, hikes running around with his dog, and doing the things he loves every day.

ICYMI: Must See Theatre: “SIX: The Musical” is Fun, Crazy and Amazing Show at National Theatre

The Alexandria Film Festival Is On Now!