ALEXANDRIA, VA – Monday gin is poured into a tall clear glass. Lemon and Prima Pavé bubbly are then added to the same glass. When dried pea tea leaves are introduced, the tea’s interaction with the citrus turns the liquid into a lovely shade of lavender. The resulting drink, topped with a straw and nicknamed “Mondays in Paris” at Café 44 in Alexandria, tastes as good as it looks. And the best news: it is completely alcohol free.

Mondays in Paris and four other drinks are part of the mocktail menu at the Canal Place waterfront restaurant, introduced just in time for the 10th anniversary of Dry January, which began as a public health initiative from Alcohol Change UK, a British charity, and in which participants abstain from alcohol for 30 days.

Estimates about participation in Dry January vary, with one survey concluding that 19 percent of adults participated in 2022, while another pegged the figure at 35 percent. Locally, the food website Pantry & Larder ranked Virginia 14th out of 51 US regions for its interest in Dry January. Washington DC ranks 1st in that survey, while Maryland ranks 18th.

What is undeniable is that, after the excesses of the holidays and as the calendar turns to a new year, significant percentages of adults are looking for alternatives to their usual ales, wine, and cocktails. “After all the holiday drinking, holiday festivities, and New Year’s goals,” Krystal Magrigal, the head bartender at Ada’s on the River, says, “there’s an increased interest in mocktails and non-alcoholic drinks in January.”

Chef Mason, the executive chef at Whiskey & Oyster, added that mocktails allow adults to participate in social drinking without being conspicuous. “Whether you’re resetting after the holidays, on a medication, are a recovering alcoholic, or just want to pace yourself, you can stand and drink with your friends without feeling like you’re limited to a soda,” Mason said.

According to Gallup, which has measured alcohol consumption by Americans since 1939, the percentage of adults 21 and older who say they drink alcohol averaged 65 percent over the past two years. The same survey reported a majority of US drinkers prefer beer, followed closely by wine and liquor.

The National Institute on Alcohol Abuse and Alcoholism reports that taking a break from alcohol for a month could lead to myriad positive changes, including better sleep, weight loss, less stomach irritation, and less fatigue and malaise. The Cleveland Clinic found that health benefits may include increased energy, better heart health, decreased liver inflammation and clearer skin.

Nick Howell, who bartends at Café 44, has definitely noticed a shift over the years. “It’s now a popular mentality from guests in January,” said Howell, who has bartended for 12 years. In response, Café 44 worked with a local distiller to create its mocktail menu. One of those results was Mondays in Paris, which includes an alcohol-free sparkling wine and a zero-alcohol gin.

Zero-proof alcohol is also part of the zero-proof menu at Whiskey & Oyster, incorporated into its zero old fashioned, zero gin & tonic, and zero tequila sunrise. And while Whiskey & Oyster has a year-round mocktail menu, its most popular January mocktail is “Grandma’s House,” which starts with the same pressed apple base used in the restaurant’s “Apple Pie” drink. Instead of adding moonshine and apple liquor, however, “Grandma’s House” adds cinnamon and spices, resulting in a warm drink perfect for a cold evening. Also on the Whiskey & Oyster mocktail menu is a wild blueberry green tea, a mango coconut cooler, and a pomegranate fizz.

Apple also plays a role in one of two new mocktails at Ada’s on the River. The apple-ginger fizz includes a dehydrated apple slice, mint, ginger, and a cinnamon stick. The drink’s pleasant sweetness is nicely balanced by the ginger and cinnamon. For those who prefer something more tart, Magrigal created a blackberry limeade garnish by a sprig of rosemary.

Ada’s on the River is located on the new Riverwalk facing the Potomac at 3 Pioneer Mill Way, Alexandria, VA 22314.

CLICK HERE FOR ALL THE MENUS FOR ALEXANDRIA WINTER RESTAURANT WEEK 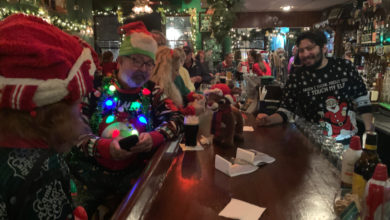