ALEXANDRIA, VA—The Del Ray neighborhood in Alexandria, Virginia cries out for its own defining entry, and the community leaders have put their heads together, canvassed the neighbors, and made a proposal to City Council to create what will be called the Del Ray Gateway.

The major improvement project, in PARKnership with the City, will transform the corner at Mt. Vernon and Commonwealth Avenues into a beautiful new Gateway, which will include the Nancy Dunning Memorial Garden and a community Spray Park.  Right now the Colasanto pool and a corner pocket park occupy the space.

The Community Partnership applied and obtained a matching $48,000 grant from the City to assist with Phase I development and construction, and while some monies are already in the coffers, the neighborhood still needs to raise just over $42,000 by June 2018.

The Del Ray Citizens Association will be donating all of their proceeds from their Home & Garden Tour this year but a lot more is needed, and the Del Ray Gateway is asking community help. 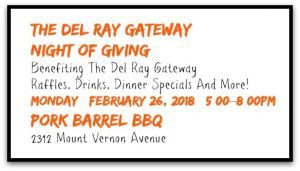 Toward that end , they are throwing a big party called the ​Del Ray Gateway Night of Giving​ on February 26 from 5-8 pm at Pork Barrel BBQ, where raffle tickets will be sold for the opportunity to win one of three to five amazing gift baskets valued between $1000 to $5,000. Examples include baskets of “Dining in Del Ray,” “Wellness in Del Ray,” and “Dogs in Del Ray.” One of the bigger prizes available is a $5,000 Invisalign package donated by Del Ray Smiles.

*Proceeds from this great community activity will benefit ​The Del Ray Gateway​, ​a collaboration of community members, business owners, and the City of Alexandria as we redevelop the triangle park at the corners of Mt. Vernon and Commonwealth Avenues.  The development will include the Nancy Dunning Garden (NDG), in honor of Nancy Dunning and honoring all that she gave to her community.  In addition to the NDG, the Colasanto Pool (which has been closed since 2010) will be reconstructed into a wonderful and artistic splash park for the community to enjoy!

About the Nancy Dunning Garden 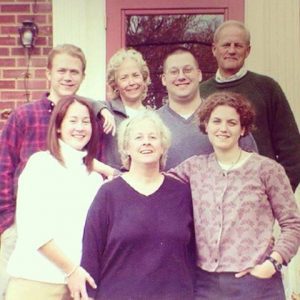 Nancy Dunning was a mother, wife, sister, daughter, aunt, friend and some would call her, “The Queen of Del Ray.” As one of the town’s top-producing and most beloved real estate agents, Nancy helped put Del Ray on the “most desirable” map,  bringing new buyers and developing the neighborhood so many have come to love and cherish.

She, along with others, saw beyond the closed businesses and under-developed spaces, and had a vision to see what now is frequently referred to as, “The Avenue,” which houses the shops that have found homes along Mt. Vernon Avenue.

On December 5, 2003, Nancy Dunning was murdered by a now-convicted serial killer in her home in Del Ray.  Her death impacted the hearts of many, who have long sought to honor her memory and the joy, optimism, and life she brought to the little community in the BIG city.

Her daughter Liz said it best in the ​eulogy​ she gave at her funeral, “​There wasn’t a day of my life – and there won’t be one – when I wasn’t sure that my mom loved me, that she believed in me, that she was proud of me. And with or without a secret decoder ring, a cape, or a phone booth to change in, it truly takes a superhero to, in this crazy messed up world, love people so well and so much. So perfectly. It takes all that to be what I have – the best mom in the world.”

To help Nancy’s memory endure, the Nancy Dunning Memorial Garden will honor her legacy and be a special place to reflect and enjoy the neighborhood and community she helped create.

About the Splash Park 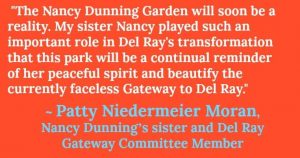 The Colasanto Pool has been closed since 2010. Since then, it has been an eyesore in the community located right at the front door of Del Ray. The City plans converting it into a spray park for children in 2020. Funds are required to clear the site and transform it into an inviting green space that works for both adults and children year round and reflects the spirit of Del Ray.

The Alexandria’s Community Match Fund for Phase 1 of the project has been awarded, which will include the removal of the chain link fence and the old wooden posts and deck over the pool space so the area can be used in the meantime as a green space for families. To complete Phase 1 of the project, another $24,000 must be raised by June 30, 2018.