ALEXANDRIA, VA – Have you seen a little park with a bench and not much more in your neighborhood and wondered what it is? Chances are you have bumped into one of Alexandria’s 25 pocket parks.

Pocket parks are identified as municipally-owned parks measuring less than half an acre that have been acquired over time for various reasons.

Some of the parks were abandoned lots like 48 South Early Street, which is in the Society Hill neighborhood between Duke Street and Wheeler Avenue. The City acquired the park through the open space program in 2009. Prior to being a park, the parcel was a lot with an abandoned home in disrepair on it. The land and home were purchased by the City and the home was demolished creating the park.

The Society Hill Homeowners’ Association has adopted the park, whch is 0.42 acres and is located entirely within the resource protection area (RPA) along Strawberry Run. The park features a walking path, large shade trees, an open lawn, a bridge over
Strawberry Run to a wooded area, and benches.

Alexandria’s 25 pocket parks are below and Zebra has linked each directly to a Google Map if you are trying to find it:

The City’s report says, “The pocket parks provide greenery, a place to sit outdoors, and in some cases, a playground.”

In 2018 and 2019, City staff conducted outreach, including site observations, surveys, and workshops, to gather an understanding about park users’ preferences, including areas that should be enhanced, transformed and preserved. A cost estimator is currently reviewing the plans to develop the budget.

The park at 1301 Powhaten could use a name for example. It is in the Northeast neighborhood of Old Town, and is only 0.15 acres but it features large shade trees and open turf for active play. The City has big plans for this little park including a name to give it an identity, adding pedestrian and bike crossings, widening sidewalks to six feet to meet current standards, adding a welcome sign, benches and tables, a walking path, pruning the trees and maybe displaying some public art.

Similar changes are projected for every site, but the Plan calls for uniform signage in all the parks, as well as ADA compliance for any new construction.

The Pocket Parks Improvement Plan was presented to the Alexandria’s Park and Recreation Commission on January 16. The public is invited to review and provide comments on the Plan.

Send comments for the Park and Recreation Commission to Ana Vicinanzo, Urban Planner, at [email protected] by February 19.

There is a public hearing about the Plan on February 20, at 7 pm at Mount Vernon Recreation Center (2701 Commonwealth Avenue).

Are You Prepared? Be Winter Weather Ready this Year! 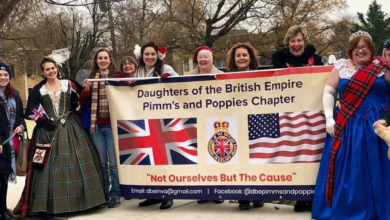 Join the Daughters of the British Empire Virginia Chapter