ALEXANDRIA, VA – Earlier today, The Zebra Press received a Letter to the Editor from Alexandria resident James Clark. It concerns the future of Taylor Run. The full text follows:

To reduce sediment and nutrient loads in the Chesapeake Bay, the City of Alexandria is proposing an ambitious $4.5 million plan to re-engineer 2,000 feet of Taylor Run, which courses through the woods in Chinquapin Park. The City’s bulldozers would raise the channel, cut down the flanks of the stream, and install boulders to create a cascade of low ledges. This “stream restoration” would be major surgery, scraping off all of the plants, seeds, and topsoil around the creek. To recontour the creek and allow access to the bulldozers, the City plans to kill 270 trees. Bulldozer traffic running over tree roots will also unintentionally kill more trees. After the regrading, the City will plant small trees and shrubs to replace the bulldozed plants and trees.

Taylor Run is nestled in Chinquapin Hollow, flowing through an old growth forest and past Alexandria’s largest acidic seep bog, a world rare ecosystem covered in diverse ferns. The popular Chinquapin Nature Trail parallels the creek. Over the decade, the City and volunteers like me have cleared most invasive plants from the valley, leaving a rare urban woodland rich in native plant diversity and beauty. (By way of contrast, most “stream restorations” start with a stream area choked by invasive plants). The City has identified dozens of species of native trees, shrubs, and flowers in the valley, including 13 species of ferns and 28 species that are rare or exist nowhere else in Alexandria.

Like many urban streams, in places, Taylor Run has carved a relatively deep channel over the decades since it was surrounded by a city. The root cause of this is the phalanx of hard surfaces, like streets, parking lots, and roofs in the upstream watershed. Since the 1920s, surging runoff from big storms has carved down to layers of impervious marine clay, in some places more than 10 feet below the surrounding stream bank. Over the years, the City has inserted boulders and hunks of cement in the creek to protect King Street, sewer crossings, and some of the banks.

The City claims that its “restoration” will prevent the erosion of a pound of potassium for every $16,000 of taxpayer money expended on the project. (While the City seems to consider this a bargain, I would note that $16,000 a pound far exceeds the cost of silver.)

We doubt whether the City’s plan will yield much in the way of nutrient or sediment savings, for several reasons: First, the plan does not attempt to prevent or forestall the volume of storm water flushing into Taylor Run. Second, much of the channel is already well protected by boulders and cement. Third, the ancient dense clay and cobble around the base of most of the creek is rather impervious and contains virtually no phosphorus. Fourth, the construction and early life of the project will cause a lot of muddy runoff. And for decades, after the 270 trees come down, there will no longer be a tree canopy to absorb rain and slow down its impact on the newly open area and the living roots of these trees will no longer anchor the soil and support the banks.

These “stream restoration” projects frequently do not work out well. Whether it takes 10 years or 100 years, design elements of the newly contoured stream will ultimately fail under the force of repeated storm surges. In Arlington, most of the “restoration” project of Cameron Run (about ten years old) has violently washed out, creating quite a canyon. The intact area at the bottom of the project is hard packed, without topsoil, and virtually devoid of plants. As for Alexandria’s ten year old Strawberry Run restoration project, just north of Duke Street, the tree canopy has never returned. In the bright sunlight, the soil disturbed by the bulldozers is compacted and largely dominated by invasives.

Bulldozing the area around Taylor Run and eliminating large areas of the tree canopy will create a perfect environment for invasive plants like porcelain berry, honeysuckle, and mile a minute to retake the valley. Without the tree canopy, this wet area of disturbed soil will be energized by direct sunlight. While the City proposes to defend its plantings against invasives, that will take years. Typically, “stream restoration” contractors do not monitor the health of plantings after projects after construction is complete.

Planting saplings and shrubs in the newly bulldozed areas won’t restore the diverse biota that nature has placed there. Many of the seedlings planted will die or be browsed by deer. Without a huge effort, with an extensive and repeated use of herbicides, energized invasives will wrap up and shade out planted trees and shrubs within a year or two.

During the COVID pandemic, when the City’s tax revenues are down 34% and a record number of our citizens are unemployed and in financial extremis, spending $4.5 million to recontour a stream is an odd priority. In this emergency, isn’t there something better to spend $4.5 million on, like public health, a food bank, or even paying off debt service?

There is no doubt that improving the Bay’s health requires reducing sediment and nutrient pollution. But can’t we find cheaper, more environmentally sensitive ways to accomplish that goal? If people just quit overfertilizing their yards, we could prevent massive amounts of nutrient runoff. So would using lower potassium detergents. The City could build more rain gardens or retention ponds to get at the root problem of erosion. Or we could purchase buffer zones along problem streams that drain into the Chesapeake.

Alexandria’s natural resources plan adopts the wise anchor of the Hippocratic Oath: “First, do no harm.” The City is proposing an operation akin to a total skin transplant for poor Taylor Run, confident that it can “restore” or even improve on nature It won’t. Don’t let it happen.

Letter to the Editor: 'I Was Shocked to Read a Story About Removing Objects From Their Location' 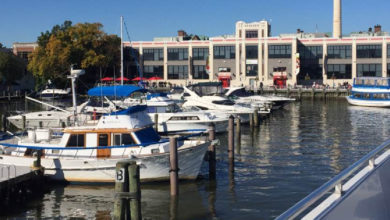