Alexandria, VA – Vicarious living and working via streaming media and zoom platforms have become a way of life since 2020. Virginia wineries were quick to offer virtual tastings when COVID closed the tasting rooms. Wine sales in the state and across the country soared.

Spotting an entertainment trend, TV production companies soon churned out not one but four shows for the isolated Z~oenophile to binge: Under the Vines, The Kings of Napa, Promised Land, and Grand Crew.

Under the Vines, from AMC Networks streaming on ACORN, is a beguiling story as old as wine: two estranged family members inherit a vineyard in Central Otago, New Zealand. Urbane socialite Daisy Monroe played by Rebecca Gibney and city solicitor Louis Oakley played by Charles Edwards (The Crown, Diana) vie for vino accolades with the local winemaking maven Marissa after a surprise Oakley Wine wins at a prestigious competition.

Since Kiwi vino is presumptively all about Sauvignon Blanc in the U.S., it’s what we’ll spotlight for an Under the Vines binge party. Walsh Family Wine, formerly the Northgate property in Purcellville, offers two Sauv Blancs. The 2020 Bethany Ridge and the 2020 Twin Notch Sauvignon Blancs are ready to roll. Both are classics without being overly herbaceous and grassy. Appropriate notes of kiwi permeate along with the expected citrus grapefruit, lemon, lime, and a whisper of bergamot orange.

The husband and wife team of Nate and Sarah Walsh founded Walsh Family Wine in 2014. Previously, Nate was the award-winning winemaker at Sunset Hills and 50 West. Before opening their brick-and-mortar operation, he and Sarah sold their wines at farmers’ markets and garage tastings and to local restaurants. In 2014 both Canney wineries added a Sauvignon Blanc from the Walsh Family Wine label to the wine menu, featuring Sarah’s elegant mountain-ridge skyline abstract design, which inspired the Walsh Family’s label.

The Kings of Napa is from executive producer Oprah Winfrey for her OWN streaming channel. Reginald King, patriarch of the family and founder of the House of Kings wine, dies suddenly as his family squabbles over control and management of the vineyard. The show is Falcon Crest meets the Banks of Bel-Air. With episode titles like “She’s Gotta Crush It,” “What’s Port Got To Do With It?,” “How Stella Got Her Pinot Back,” “Mo Bottled Blues,” and “Judas and the Black-Owned Vineyard,” you know the mudslinging on top of wine swirling gets real from the get-go. The Kings of Napa is “all about Black excellence in motion ~ wine, style, and cuisine.

So, where to get your King on? For that Napa experience, you can’t go wrong with Breaux Vineyards in Hillsboro. The stately stucco and tile-roofed tasting palace mixes Spanish Mission with New Orleans razzmatazz and French savior faire. Sitting on the Vidal Patio overlooking vines cascading downhill to a horizon of undulating hills, you can readily fantasize that you are in Napa.

Another option is the real-life King Family Vineyard in Crozet near Charlottesville. Their Merlot might give the House of Kings and Stella a run for their Pinot. The Seven 2018 (named for the seventh chukker in a polo match), a fortified red wine aged two years in Kentucky bourbon barrels, addresses the question…What‘s Port and polo got to do with it? Yes, there are polo matches, a polo school, and lessons at the Roseland Polo Club.xd

But if it’s Pinot Noir you’re looking for, you’re off to Ankida Ridge in Amherst. High atop an Appalachian mountain nearly 2,000 feet above sea level is a microclimate where the seemingly impossible happens. Owners Christine and Dennis Vrooman are growing some of the best Pinot Noir found in the U.S. It is the only mid-Atlantic wine invited to the International Pinot Noir Celebration held in Oregon each July.

An accidental winery, the vineyard was born when the contractor mistakenly cleared an extra acre of woods on the property. Chickens strut about the vines as natural pest control, while Katahdin sheep, mother nature’s weed whackers, graze atop land that was once as high as Everest. If you can’t make the three-hour drive or don’t enjoy heights, Ankida Ridge ships. They also have foothill tastings and a shop in Charlottesville.

Paradise Springs is the closest to Alexandria and the first bi-coastal winery in the U.S. Their Sauvignon Blanc, amusingly named 2018 F’ing Merlot, is rated 93 points by Wine Enthusiast Magazine. The 2018 K III is a yummy Rhône-style GSM blend (Grenache-Syrah-Mourvèdre) with a spicy, peppery kick, bright and not-too fruit-forward berry presenting notes of clove, river rock, and cigar box, a perfect Big Bang expression of Central Coast bravado. Best of all, the hours in Clifton have been extended to 7 pm daily and Fridays until 9 pm.

Promised Land initially aired on ABC and last month moved exclusively to Hulu. Set in Sonoma, the saga pivots from 1987 when the Sandoval brothers Joe and Billy Rincón, along with friend Lettie and her sister Rosa, cross the Mexican border in search of a better life in (you guessed it) the promised land – California wine country. The four arrive at Heritage House Vineyards, where they toil in the vines of Oliver M. Honeycroft. Joe (John Ortiz~ Silver Linings Playbook, Replicas) marries Oliver’s daughter Margaret although both he and Billy are hopelessly in love with Lettie.

Fast forward to 2022. Joe has divorced Margaret, taken over the vineyard, and is now married to Lettie, raising a combative blended family rivaling the Kings. Billy is a priest estranged from the family. Margaret returns from an extended European vacation, a successful hotel magnate reconnecting with her adult children while seeking revenge upon Joe.

In an episode last month, siblings Veronica and Antonio Sandoval competed in a six/bottle blind tasting a la Bottle Shock, including a 2003 Chardonnay. Chardonnay actually can cellar 20 years. It’s not likely you’ll find a 2003 Virginia Chardonnay, except perhaps in my cellar gathering dust somewhere.

Pearmund Cellars’ award-winning Old Vine Chardonnay grown on the Merriwether Vineyard in Fauquier County is the oldest Chardonnay vineyard in Virginia. It has been nominated as a Virginia Grand Cru Vineyard by the American Grand Cru Society. This extraordinary wine is 100 percent malolactic fermentation, sur-lie, and aged nine months in French oak. A classic buttery, oaky Chard. Try it, you’ll like it!

The crew on Grand Crew do not down a lot of Chardonnay. They’re all about big, bold reds. Grand Crew, airing on NBC, is the Black Friends of the 20s. Six friends, three guys and three gals, with a brother and sister among the group, gather at a wine bar in the Silver Lake area of Los Angeles called Cru.

For Episode 9 this past March 1, the crew headed up to a Santa Barbara vineyard. Paradise Springs perhaps? Stream the show on Peacock to find out. To quote the crew, “Bespoke this! Check your feelings. It’s time to drink.”

So let’s hook up the crew for a bottle of white, a bottle of red, perhaps a rosé instead. Settle into a cozy spot near the screen, face to face with Under the Vines of the Kings of Napa in the Promised Land with your Grand Crew.

ICYMI: Spring is Sprouting with New Restaurants in Town 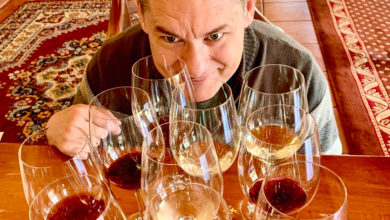 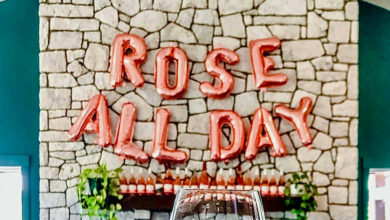 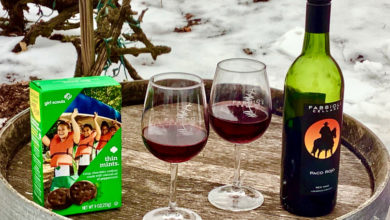