ALEXANDRIA, VA–On Thursday, July 14, AlexRenew revealed the name of the new tunnel boring machine (TBM) that will be excavating a 2-mile tunnel from the beltway to the waterfront. What started with Saint Barbara in the 1800s is a tradition of naming TBMs after women. Two centuries ago, when there was no technology and not nearly as many safety precautions, construction workers would call on Saint Barbara for protection during their work. According to Karen Pallansch, CEO for AlexRenew, “Her influence grew and shifted to creating a long standing history of naming TBMs after women in her memory.”

At the excavation site for the 2-mile long wastewater tunnel, Karen, Mayor Wilson, Vice Mayor Jackson, and countless others gathered for the reveal of the name of the new TBM in Alexandria. 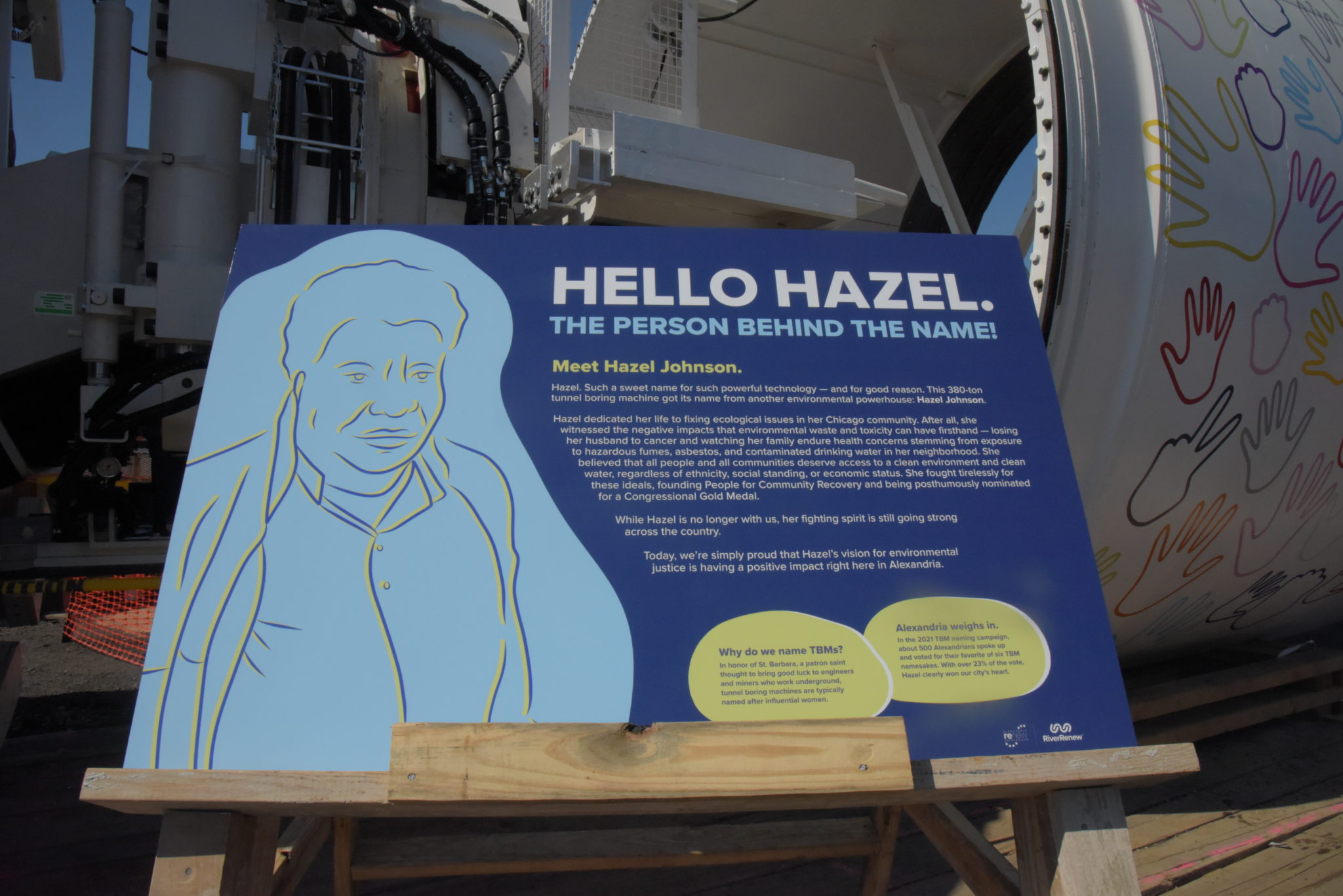 Hazel Johnson was a community activist, an ambassador for her neighborhood, an early mentor to Barrack Obama, a wife, mother, and the mother of the environmental justice movement.

Her mission began in the late 1970s on the south side of Chicago to raise national awareness for a cleaner environment. She took that mission to the Environmental Protection Agency, to Congress, and then to the White House. Pallansch states, “We honor her passion, caring, and relentless drive to make our community a better place.”

So with a curtain draw and a round of applause, Hazel, Alexandria’s TBM, was unveiled.

In July 2018, AlexRenew began a plan to make Alexandria’s waterways, sewage systems, and overall environment healthier and happier. This starts with the RiverRenew program. In Sept. 30, 2021, RiverRenew broke ground at the Pendleton Street outfall, the final stop in Hazel’s two mile journey. Before Hazel can begin her own underground journey, however, she needs a way underground.

At the name revealing ceremony, visitors were welcome to tour the site and gaze down into two forboding shafts in the ground. Once these shafts reach approximately 160 feet deep, Hazel will enter and begin her tunnel boring process.

What took 18 months to design, will now take another year to do its job; and then another two to complete the project. Hazel’s 380-ton design will bore a 2-mile long, 12 feet diameter tunnel that will prevent over 120 million gallons of combined sewage from entering local waterways and our shoreline and polluting habitats.

“Today is really a big day for us,” exclaims Pallansch. “Today we celebrate a significant milestone on the largest infrastructure project our city has ever seen. This is a once in a lifetime project.”

An engineer herself, Pallansch is awed by Hazel’s design, structure, and purpose. She is a true feat of engineering, brought together by countless pairs hands. 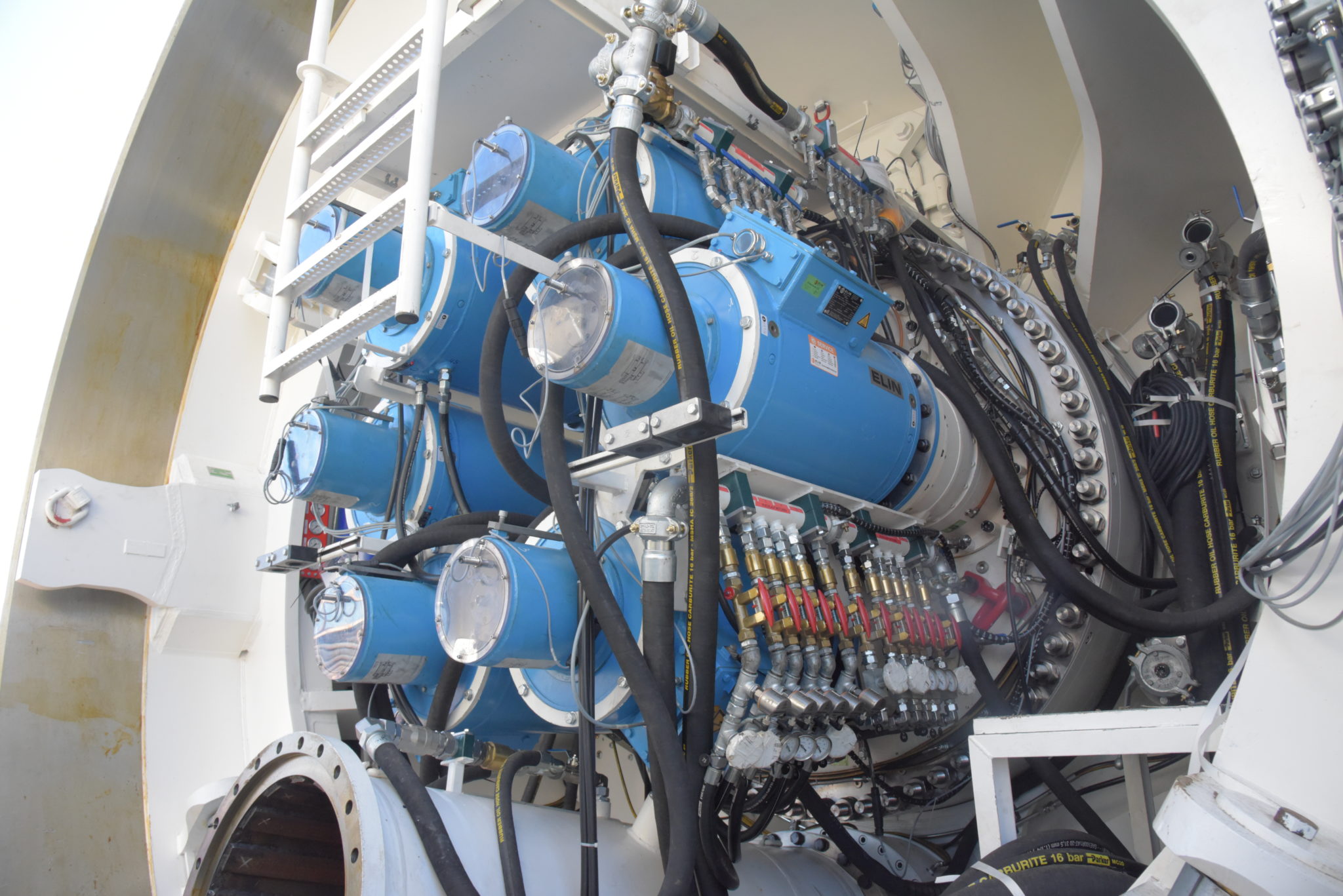 “Having great comm support, everybody has been behind us,” states Pallansch. “We couldn’t do it without all those folks. It is all hands that have worked hard to make this happen for us. I couldn’t be prouder.”

Those hands will not be forgotten, as dozens of large, colorful, five-finger outlines adorned Hazel’s ivory exterior. Paint pens were passed around for visitors, contributors, engineers, city officials, and admirers to sign.

One hand was in tribute to the late Kerry J. Donley, former mayor of Alexandria, member of many local boards, and constant community and environmental advocate.

Mayor Wilson took  moment to recognize Kerry’s memory and to pay tribute to the generations that will benefit from his legacy in years to come.

“Our hearts are certainly heavy this morning as we gather without Kerry here. Last night I was on that balcony looking at the TBM for the first time when I go the call and I think if there was ever a more fitting and audacious undertaking as a tribute to Kerry it is what we are doing right here.

“Kerry always believed this was a city that could do big things. This certainly is a mind-blowing exercise for this community, and I think as a tribute to him we couldn’t come up with a better way to pay tribute to Kerry and his legacy in our city.

“This work is generational. It will have an impact for our comm and our region for generationss to come, and you should be so proud of the contributions you are and will be making in the next several years.”

What Kerry affectionately deemed the ‘rocket ship’ for its large, metal, cylindrical appearance, will begin its decent underground in the next month. For more information on Hazel and AlexRenew’s entire RiverRenew project, visit https://alexrenew.com/major-projects/riverrenew.