ALEXANDRIA, VA–Have you ever heard your mother say, “Do as I say, not as I do?” Well that seems pretty toxic, doesn’t it? After all, humans are visual learners, who learn best from watching. What mother does, daughter will emulate. That is what the National Charity League (NCL), Port City Chapter truly embodies, emotes, and evokes from its members.

The National Charity League is a “group of mothers and daughters who have come together in a commitment to community service, leadership development, and cultural experiences,” states their website. But the Port City Chapter goes much deeper than that. It asks, Exactly how does one serve, lead, and experience culture in their community?

Hilary Truong, a former therapist and current mother-daughter relationship expert and speaker, was the evening’s speaker. Following a car accident that injured her mother, Truong shared the distance felt in her relationship with her mother because they lacked dialogue to talk about the hard parts of life.

Introduced to NCL through a colleague in January, Truong knew it was not only a fit for her, but something she felt she should do.

Her personal story was an example of her message, that mothers and teen daughters can in fact remain close through adolescence.

In Truong’s day-to-day work with mother and daughter pairs, she does more than speak with them. She will often take them on travel experiences where they learn to work together, learn more about each other, and learn how to have fun with each other.

These experiences were the core of Truong’s NCL discussion. Her main theme was that mothers and daughters must see each other as human beings –  ones who share similar experiences, stresses, and struggles.

Truong elaborates on that theme when she says “that daughters crave the love and acceptance of a close relationship with their mothers, even though mothers are sent messages that they should not remain ’too close’ to their daughter as she needs to separate to fly the nest. In fact, it is the connection during this stage of their relationship that will save them from carrying hurt into their mother and adult daughter relationship.”

While Truong works with mothers and daughters of all ages, from new mom and child to the elderly, the evening’s discussion was specificially geared toward the teenage daughter and middle-aged mother.

Pressure, perfection, responsibilities, looks, sacrifice. All topics of concern raised by both mothers and daughters in the room. This parallel between the way females, daughters and mothers alike, are expected to perform throughout life, spoke to everyone in room. That revelation opened the eyes amd minds of many.

“I love helping people,” stated Truong. “And helping people have human connections, especially this age with teen girls. Mothers and daughter can struggle, go in opposite directions. Teenagers can be difficult to parent. Helping them know how to navigate those year is what is important to me. It makes a difference in the life of the relationship.”

Following her discussion, the girls and their mothers were invited to interact, filling out note cards and worksheets of topics they’d like to discuss based on the night’s topic

Her final message to the crowd, which she summarized for The Zebra: “I hope they see their moms as human, see and understand the ways their moms are doing the best they can and that the relationship is important to them. I hope it sparks conversationss they might not otherwise have.” 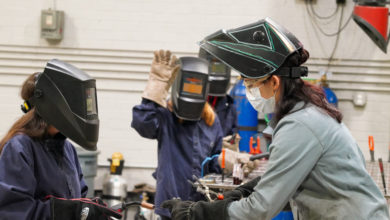