On October 17, I was delighted to get a chance to see not only the newly opened Capital One Hall in Tysons, Va., but to hear a new piece of music composed by the brilliant Oakton, Va.-based composer Henry Dehlinger and sung by Metropolitan Opera Soprano Danielle Talamantes, accompanied by the full 50+ piece National Philharmonic Orchestra led by Piotr Gajewski, music director and conductor.

The entire program was well chosen and I’ll touch on those pieces, but my focus is on Talamantes’ and Dehlinger’s eagerly awaited new work for soprano and full orchestra, T.S. Eliot’s The Love Song of J. Alfred Prufrock. I have heard parts of it played by Dehlinger and sung by Talamantes in private concerts, but what was about to come with the full orchestra was, to me, stunning! This piece was to have premiered in April, 2020, but the worldwide pandemic closed concert halls and it was rescheduled several times before premiering both at The Music Center at Strathmore on Saturday night, Oct. 16, and then at the Capital One Hall in Tysons on Sunday afternoon.

Just so you know in case you haven’t heard (I hadn’t until just a few weeks ago), Tysons has a brand new state-of-the-art, 1600-seat performance hall, along with smaller venues, and it officially opened October 1, with Grammy, Tony, and Emmy Award-nominated singer, songwriter, and actor Josh Groban. It is a sleek, extremely modern performance hall and is designed for Broadway productions as well as concerts and other performances. The very high-ceilinged lobby is a comfortable place for the audience to linger with lots of space for bars and food service tables bathed by gorgeous light pouring into the wide-open expanse.

The orchestra opened the concert with a lovely rendition of Charles Ives’ Variations on America, following it with the Dehlinger setting of T.S. Eliot’s poem. As you may know, The Love Song of J. Alfred Prufrock opens with a few lines from Dante’s Inferno, then the poem begins: Let us go then, you and I, When the evening is spread out against the sky…and so it continues telling the story of a sad, introverted man and Wikipedia states: who is overeducated, eloquent, neurotic, and emotionally stilted. Prufrock, the poem’s speaker, seems to be addressing a potential lover… I’m sure you get the gist of this fascinating poem, published in 1915.

Talamantes delivers this text with a supreme understanding of the subtleties of T.S. Eliot’s poetry, and Dehlinger’s writing shows off her plush and startlingly beautiful vocal instrument. She has complete control top to bottom of an incredibly wide range, therefore the audience is treated to her full expression of the meaning and her understanding of the poetry. In case this is your first exposure to Ms. Talamantes, she has been hailed as a prolific and versatile vocal artist whether on the operatic stage, in the concert hall, or in the recital hall. The audience and this reviewer certainly could hear that amazing versatility not only in her voice, but in the music as well.

It has been written about Dehlinger’s totally modern music… he has found a modern musical language that is evocative yet familiar. It makes use of eclecticism while being rooted in the American vernacular…I can assure you, dear readers, that Henry Dehlinger shapes his music to illuminate the meaning of the text. Dehlinger quotes Francis Poulenc: The musical setting of a poem should be an act of love never a marriage of convenience. Trust me, he achieved that in this magnificently written setting of Prufrock. Dehlinger’s orchestration (yes, he did that, too!) calls on the full range that a modern orchestra can deliver and that music, even without the vocal line, is lovely! I want to hear this piece again and again to get familiar with its complexities. It simply MUST be recorded! My 13-year-old granddaughter was with us on Sunday and loved every minute of Talamantes’ and Dehlinger’s performance.

After the intermission during which I heard nothing but talk of Danielle Tallamantes’ stunning performance and Henry Dehlinger’s amazing new work, we were treated to another beautiful listening experience by the orchestra and the celebrated violinist, Gil Shaham, of the Ludwig van Beethoven Violin Concerto in D Major, Op. 61. Mr. Shaham played so beautifully and looked so relaxed while doing so, I just bathed in the sound of the orchestra and violinist in this magnificent new hall. The audience adored him, too. What a totally professional and generous musician! And what a perfect afternoon we had! Wish you all could have been there, too! 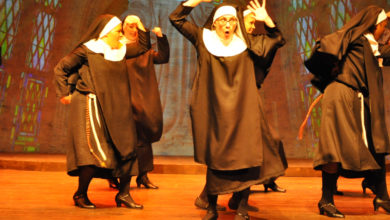