WASHINGTON, DC – Originally premiering in 1981 and winning a Tony Award for Best Revival in 2020, Charles Fuller’s A Soldier’s Play is as powerful and insightful today as ever. Set on a fictional Army base in 1944 Louisiana, amid the Jim Crow era, it reflects a time when Negro soldiers trained on U. S. bases before being shipped overseas. Called up to fight the Nazis, the men were insulted, brutally attacked, and often murdered by Klansmen and white supremacists when they returned to their hometowns. Often, the racism experienced on-base was inflicted by Black commanders.

In this story, the men are living and training on a base that had never seen a high-ranking Black officer. That is until Captain (and lawyer) Richard Davenport (Norm Lewis) arrives to investigate the murder of Sergeant Vernon C. Waters (Eugene Lee), and a power struggle ensues between Davenport and Captain Charles Taylor (William Connell), the White base commander.

The mystery of a suspicious death on the segregated Fort Neal opens with the men singing in the monotonal work chants of early prison chain gangs and drumming against the wooden floorboards. It’s as haunting as it is mournful with shades of things to come.

Sergeant Waters is a reverse racist – angry at the military for refusing to respect him and degrading to his “Colored” troops for not trying hard enough to elevate themselves in society. He demeans his young recruits with racist insults, then flatters them to ingratiate himself. Deep inside, he is tormented by his own fear and self-loathing. One of his men, Private C. J. Memphis, is a sensitive young man given to playing the blues on his guitar. Waters tells him, “You bring us down, boy.” And when C.J. hangs himself after being falsely accused of murder by Waters (who scapegoats him), Waters announces, “One less fool for the race to be ashamed of.”

Norm Lewis is, of course, the main draw. His name features prominently on the cover of the playbill. So commanding is his presence and stature that the audience simultaneously gasped and burst into applause as he made his entrance on opening night. Lewis is well bracketed by another veteran actor and award-winning playwright, Eugene Lee, whose portrayal as Waters is indelible. And, as so often happens when veteran Broadway actors rule the stage, the rest of the cast rises up brilliantly alongside them.

It’s a snapshot of the worst of America and the best of men who strive for justice regardless of the outcome. And though it’s painful and visceral to witness, we need to revisit our history in order to not repeat it. In some places throughout the county, race relations haven’t changed much sinece the play received its first accolades over 40 years ago.  A Soldier’s Play teaches us the importance of “seeing” each other and continuing the conversation, hard as it may be, while learning the truth. 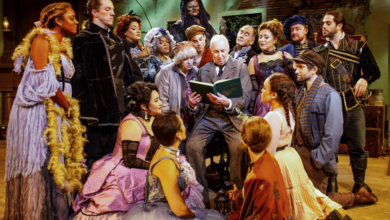